And with the #12 Pick in the Arrowhead Pride Community Mock Draft, the Denver Broncos Select...

Share All sharing options for: And with the #12 Pick in the Arrowhead Pride Community Mock Draft, the Denver Broncos Select...

Keyser Soze with the pick...

Like sands through the hourglass, so are the Days of the Donkeys Lives. 2008: Broncos come out of the gate strong, moving to 8-5 with a two game lead in the AFC West. Just win a game and the division is yours. Doh. After 3 straight losses by Denver, and 3 straight wins by San Diego, the Chargers vault to the AFC West title, and Denver chokes itself out of the playoffs by a combined score of 112-54. Michael Edward Shanahan, exit stage left. After 2 Super Bowls, 7 playoff appearances, and 138 wins in your 14 years, your time here is done. Jack Harry says he has a house for you in KC. 2009: There's a new Sheriff in town, and his name is Josh "Doogie" McDaniels. After coordinating the New England Patriots offense from 2006-2008, 32 year old Josh McDaniels is brought in to replace the Leatherman. After identifying multiple team needs, McDaniels and owner Pat Bowlen (a) sign a myriad of free agents to plug multiple holes and (b) fail to trade for QB Matt Cassel. The failed trade and subsequent leak of information leads #1 QB and team leader Jay Cutler Cartman to declare that he is taking his toys and going home. (Note to KC fans: Apparently there are some positives to utilizing a cloak of secrecy in these types of negotiations.)

Denver has several real needs, including a head coach over the age of 12, a good lawyer, and a team therapist. However, if Dr. Phil can bring the starting QB and the head coach back on the same page, then the primary team need is Defense. And a lot of it. Denver's D was horrible last year. Just plain ugly. Think Greg Robinson's playoff defense against Indianapolis. For God sakes, the wide open 3-and-out offense of the Damon Huard-led Chiefs hung 370 yards and 33 points on Denver during week 4. That should tell you enough. The Broncos run defense was particularly pathetic, as evidenced by LJ's single game 198 yard outburst in that game. Overall, the Broncos D ranked 29th in the league, allowing 375 yards per game, including 146 per game on the ground. They also ranked 26th in number of sacks and 31st in number of interceptions. Eeegads. Those numbers could only get worse if your team was ranked 31st overall and you set the NFL record for sacks in a year .... But I digress. You get my point: Clearly, Denver's biggest need for an infusion of new talent is on defense. Furthermore, with the acquisition of a new head coach in Josh McDaniels and a new defensive coordinator in Mike Nolen, the Broncos are making the move to a 3-4 base, so there are some key personnel changes that will need to be made. Like the Chiefs, Denver will be looking for a run-stuffing mass of humanity to anchor the line at DT, a 3-4 DE, and some play-making linebackers to rejuvenate the front 7.

Much to the chagrin of envious KC fans, Denver was one of the most active teams in free agency this year, filling key holes at several positions. The gold star addition was safety Brian Dawkins. After going through 7 different safeties last year, Denver's defense desperately needed a run-stuffing safety that could anchor the secondary, and Dawkins is still one of the best in the game. In addition, he will provide some much needed leadership to that side of the ball. Despite his age, Dawkins is still a great player and a great leader, and the Broncos have added a significant piece with this addition. Other offseason signings include QB Chris Simms, RBs LaMont Jordan, Correll Buckhalter, and J.J. Arrington, ILB Andra Davis, DE/NT Ronald Fields, CB Andre Goodman, DT Darrell Reid, and WR Jabar Gaffney.

The Broncos have at least 9 picks in this draft, including the 12th (rd 1) and 44th (rd 2) overall, and rd 3, rd 4, two in rd 5, rd 6, and two in rd 7. Without a doubt, Denver has to go heavy on D throughout the draft. But with a play-making safety off the checklist, it's time to focus on the front 7. The perfect Rd 1 pick would have been the best DT in the draft, BJ Raji, but he's off the board. Time for Plan B. The question is, do they spend this pick on a run-stuffing middle linebacker that would likely solidify the 3-4 LB corp, a versatile outside LB that can rush the QB, or the best true 3-4 DE in the draft that could be a hit or miss prospect? 14 years, your time here is done. Jack Harry says he has a house for you in KC. 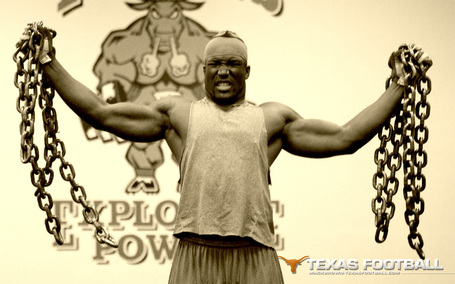 The Broncos have a lot of options with this pick, but they opt for the best player available in Brian Orakpo - he is widely regarded as a Top 10 pick, and in many draftnik circles, he is Top 5 material. After potential suitors Cleveland, Green Bay and Buffalo let Orakpo slide, the Broncos feel very fortunate to pick up perhaps the best rushing LB in the draft. Orakpo is a versatile player, with the ability to play 4-3 DE or 3-4 OLB. The 6'3", 263 lb DE has multiple awards to show from his work at Texas, including the Nagurski Trophy for the nation's top D player, the Lombardi Award for the nation's top lineman, and the Hendricks Award for the nation's top DE. Orakpo is an absolute beast, and is regarded by many to be the premiere pass rusher in the draft. In 2008, he recorded 42 tackles (including 19 for a loss), 11.5 sacks, 30 QB pressures, and four forced fumbles; impressive numbers considering that he spent part of the season with a knee injury. The addition of Orakpo should provide a huge boost to Denver's ailing defense and could strike fear in the heart of KC fans for years to come.

Strengths: Nice frame with great muscular build and bulk ... Highly athletic with a nice burst off the snap ... Great flexibility and shows an ability to bend his waist and dip past offensive tackles ... Nice balance and stays on his feet ... Elite swim move ...... Consistent motor and is a relentless pass rusher ... Strong at the point of attack ... Very quick; agility grades out highly ... Shows a very wide range on the field ... Big time leader and gets clutch plays ... Pro Bowl potential.

Player Comparison: Terrell Suggs. Both players have the same build and ability that strikes fear into the hearts of opposing left tackles.

On the clock: Washington Redskins (The PARADE)

Click over for the schedule and current draft results.

And Brian Orkapo falls to right about where he should fall IMO. Much of my criticism of him has been centered around him not being worthy of the Kansas City Chiefs #3 pick. The Broncos need defensive help so bad that they have to go with the best defensive player available here.