Share All sharing options for: Daniel Holtzclaw Had a "Terrific" Pro Day 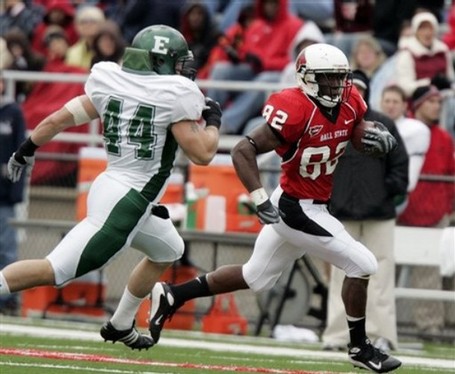 We last caught up with Daniel Holtzclaw a couple weeks ago as he was preparing for the Eastern Michigan Pro Day. Since he was unjustly snubbed by the postseason all-star game and NFL Combine, this was his best opportunity to show the 20 or so scouts in attendance why he's worth a shot.

I've been hearing that Holtzclaw had a "terrific" Pro Day, with teams particularly impressed with his size.

His short shuttle was timed at 4.31-seconds, 60-yard shuttle at 11.48-seconds and 3-cone 6.86-seconds. This surprised many on hand as Holtzclaw is considered a downhill linebacker and lateral movement is not his forte'.

He looked terrific in position drills and had a frame which was described by one scout as iron clad. The New York Jets, Houston Texans and New York Giants sent scouts to watch Holtzclaw.

The New York Giants, Houston Texans and New York Jets sent scouts to take a look at him. In all, 18 NFL teams were represented at the EMU Pro Day.

Overall Pleased with the Pro Day

I believe I had a overall "good" Pro Day. Why I chose the word good is because I didn't run the 40 that I usually run. I ran a slow 40, but this year I guess with all the 40s being slow in the ILB position it was average. Everything else was great, I definitely would have been top 5 in the 5-10-5 short shuttle, 3 cone, bench would have been number 1, vertical, and 60 shuttle. Disappointed in that part of my day but everything else I felt I killed.

The drills we did were bag drills, weaving through in and out, over them, turning and running. Then we moved to the field were we did ball drills. Working on our back pedal, turning at a 45 degree and running coming back and catching the ball, drop coverages, basically seeing how good of hips and how fluent you are. I felt I did very well on my position work to end the day. Caught every ball thrown to me and came out of my cuts as well.

Were the Chiefs there?

I'm not sure if the Chiefs were there but I noticed around 18-20 scouts were there.

The Day of the Workout

I woke up around 7:00AM, knowing that the Pro Day started at 9:00AM. Ate a good breakfast early to let my food digest and plenty of water with electrolytes to prevent from cramping.

I tried to visualize every aspect of what would occur so I'm more mentally prepared.

Soon enough it was time to head to the convo (football facility). I'm blasting my Ipod getting ready to go. I enter my weight room where I walk in and notice 20 scouts to the right of me scattered throughout the room.

Thats when I got a little more nervous. To me it seemed like a make it or break it.

I wasn't able to attend the all star games or the NFL Combine for some odd reason so this was really big. It was a good nervous because I like to be put in positions like that, where all eyes are on me.

Don't Call Him Under the Radar

Then I tried to execute at every drill the best I could. I'm hoping to receive some attention as far as going on visits to teams. I don't like teams saying that I'm an under the radar guy or I heard "they didn't want you to go to the Combine to keep you in the radar or do this and that".

If that's the case I don't like it lol. Puts me in position of not knowing, and that is what I am in now. I'm just waiting right now for my options, hopefully to receive good notice. This is where hopefully my agent and there staff go to work and work extremely hard to contact teams and hopefully set up visits.