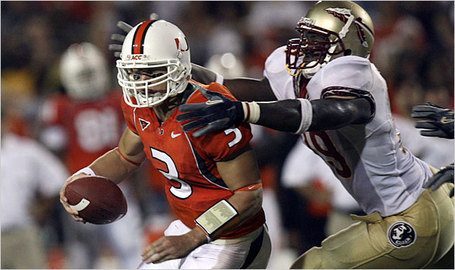 Everette Brown is a 6'4" 255 pound defensive end whose widely expected to fit best as an outside linebacker in a (you guessed it) 3-4 defense. Though most folks would argue that Brown will slide to the other half of the top 10 in April's draft, his name is gaining steam to be the Chiefs selection at #3 overall in the event that Aaron Curry heads to Motown.

Tomahawk Nation has an outstanding exit interview on Brown. Here are some of the strengths for the player they call the best defensive end to ever come out of FSU:

Brown earned his degree in three years and elected to skip his senior season.

The downsides to his game are few, but here are a handful given by Tomahawk Nation:

The more I read about this guy the more I can see the Chiefs selecting him. I do think the Chiefs are doing their due diligence here in the event of a trade down, but I also do think Brown is a legitimate candidate for the Chiefs pick.

If you don't think he's an impact player worthy of the #3 overall pick, take a look at this highlight video:

Let's face it, if Pioli and Co. have their eyes on an impact defensive player, and Curry is off the board, Everette Brown makes a lot of sense.

Here's a little more reading material on him:

H/T takclaw in the FanShots