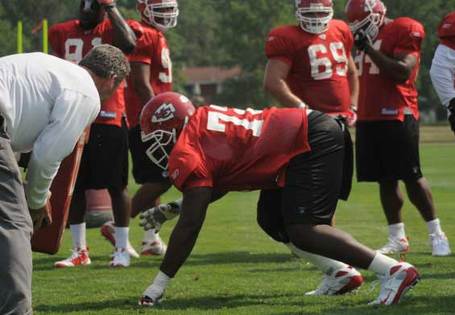 Back on February 18th, we heard via Adam Schefter that the Kansas City Chiefs were likely to employ the increasingly popular 3-4 defense.

The reasons were obvious:

Pro Football Weekly is saying that while the 3-4 defense is still likely coming, it may not be in full force in 2009. Instead, the Chiefs are likely to employ a similar 3-4/4-3 hybrid defense Pendergast utilized in Arizona last season.

The main impediment to a full switch is the Chiefs current personnel.

Not only is K.C. lacking defensive ends with 3-4 experience, but the team also doesn’t know if DT Glenn Dorsey can be an effective nose tackle. In addition, the Chiefs are thin at the linebacker position and might not have four solid starters by the time the season begins. So while the installation of the 3-4 looks to be in the offing in Kansas City, it probably won’t take full effect this season.

I don't think this is a surprise to most of us who expected the Chiefs to run some sort of hybrid.  A lot of the conversation around here in regards to the switch to the 3-4 centered around the personnel, or lack thereof.

A lot of folks argued that the Chiefs can't switch in just one offseason.  The type of defensive linemen and linebackers that defense calls for couldn't be brought to town in just one season.  As PFW says, the Chiefs current personnel is "unsuited to run that scheme."

Pendergast struggled for much of the 2008 season employing this defense in Arizona. But if last year's playoffs are any indication, Pendergast can effectively run this defense.