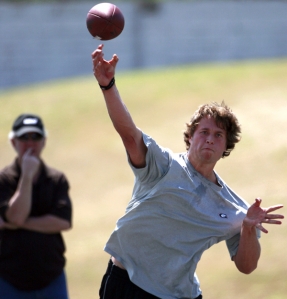 According to multiple media outlets, there was more buzz surrounding this Pro Day in Athens since Marcus Stroud, Kendrell Bell and Richard Seymour came out.

The star of the show at the University of Georgia Pro Day was Matthew Stafford. Because he didn't throw at the NFL Combine, NFL scouts, coaches and executives showed up in full force. In fact, every NFL team was represented at the Pro Day.

Stafford's stock certainly hasn't been improving as of late but a lot of that changed with what's being called an excellent session throwing the football.  Zip. Accuracy. Big arm. All words I've heard describing his Pro Day.

Here's a snippet of the live blog from Chip Towers of the Atlanta Journal Constitution as Stafford was throwing the ball:

Overthrow right deep for Demiko. . . . On the money over the middle for TE Chandler. . . . MoMass nice catch left sideline. . . . Smoking over the middle for Kenny Harris. . . . Overthrow out and up and right to Chandler . . . . On the money middle left to Demiko. . . . Get the picture: Stafford in middle of field, right on the 50, throwing west toward west end zone. . . . Skinny post for MoMass dead on . . . Deep left for Demiko never had to break stride. . . . Wow-wee, playaction fake, roll left, deep end zone for Kenny Harris right, perfect over the shoulder in the basket!

The AJC said out of 50 passes, 45 of them were on target, three were incomplete and two were drops. This jives with the NFL Network's analysis that said 47 of the 50 throws were on target.

Plenty of people were knocking Stafford for not working out at the NFL Combine but, as ChiefDJ has been saying, that was forgotten after his Pro Day.

Click over to see how some of the other UGA prospects fared.

4.6 seconds in the 40 didn't (and a 4.63 in his second attempt) help his draft stock but from what I've read his strengths are more in his quickness and "field speed".

"I don’t care what the watch says, if there’s 40 yards between him and the goal line, Knowshon’s going to get there first, I can promise you," Asher said. "I can tell you from personal experience. And NFL folks understand that. He’s as fast as he needs to be but you ain’t gonna bring him down."

He has a visit set up with the San Diego Chargers.

4.41 40 in his first attempt and 4.33 seconds in his second attempt. He improved his stock at the Pro Day.  He's also a kick returned whose expected to have the potential to make an immediate impact in the return game.

Chip Towers of the AJC talks about his athleticism:

Biggest buzz was over CJ Byrd. Officially he got 10-4 but he literally jumped off the mat on one jump but fell back, so it was a scratch. But would’ve been 11 feet!

Byrd also performed well in the bench press according to the cheers from the crowd.  He was also a burner in the 40 topping out at 4.38 seconds.

4.64 seconds in the 40 yard dash at the Pro Day. He had an excellent 2007 season but injuries hampered him last season. He's projected to be an inside linebacker.

4.49 and 4.5 seconds in the 40 yard dash helped his stock. He was 1st team All-SEC his senior year after failing to live up to expectations his first three seasons.  The knock on him has been dropped passes.

He was disappointed in 24 reps of 225 pounds on the bench press. He's a JUCO transfer who saw significant playing time last season due to an injury to the starting DT.

He's projected to be a second day, developmental prospect.