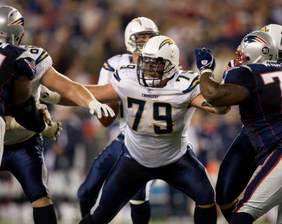 Goff is a 33 year old guard originally drafted by the Bengals in the 3rd round of the 1998 draft. After six seasons in Cincinnati, he moved to the AFC West spending five years with the Chargers.

San Diego decided not to pursue another contract with Goff following the 2008 season.

Though his age is a bit of concern, his durability isn't. He's started a full 16 game slate every season dating back to 2002.

If Brian Waters returns to the team in 2009, the Chiefs are set at left guard. However, a hole exists at right guard which was filled in 2008 by Adrian Jones. There's even been some talk of moving Damion McIntosh to the guard position opposite of Waters.

The Chiefs are also attending a private workout with LSU defensive tackle Ricky Jean-Francois today so it's unclear what coaches and/or part of the management team are attending what workout and if any contracts will be offered.

Tackling the guard position in free agency would go a long way to shoring up the Chiefs offensive line. As it stands now, the Chiefs likely have to add a guard and long-term solutions at center and right tackle.

The Chargers have been an excellent running team the past few years so it's nice to see the Chiefs strategy for the offensive line over the offseason entails players from successful units.

To piggyback on this FanPost by KU2010, I've added the poll below.