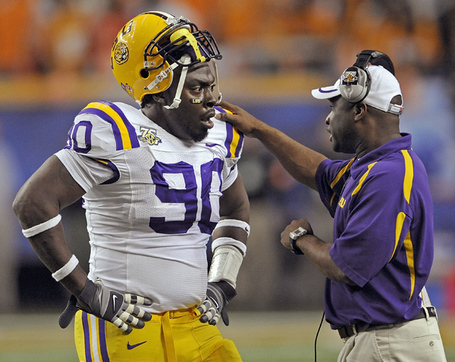 Ricky Jean-Francois will conduct a private workout for the Kansas City Chiefs tomorrow in Baton Rouge according to Scout.com.

Jean-Francois is a 6'3", 290 pound defensive tackle for the LSU Tigers.

He is described as a "bruising run stuffer" by some and even earned the defensive MVP award in the 2007 BCS National Championship Game.

CBS Sports gives a good overview of him:

It was a bumpy ride for Jean Francois in Baton Rouge. One of the top high school recruits in the country, he contributed as a freshman in 2006 (5.5 tackles for loss, three sacks) after a redshirt season in 2005. He missed the first 12 games due to academic problems as a sophomore, then won defensive MVP honor in the national title game against Ohio State after making six tackles, 1.5 tackles for loss and blocking a field goal. His junior season was also adversity-filled. He started only six of 11 games in which he played due to a groin injury and the deep, talented LSU line. He made 20 tackles, three tackles for loss and two sacks during the season.

Some folks are aware of Jean-Francois not because he's the 7th ranked defensive tackle entering the NFL Draft, but because he compared him hitting Tim Tebow to a "car wreck without a seat belt" and that the LSU defensive line was looking to take him out of the game.

Some are saying that these comments, combined with his previous academic problems and injury history, are big question marks as he gets ready for April's draft.

As a former teammate, I would bet that Glenn Dorsey is pushing for this to happen.

It's not clear what position the Chiefs expect him to play. 290 pounds isn't big for a 3-4 defensive tackle but instead may be more in line with a 3-4 end.

However, if the Chiefs are interested in Jean-Francois as a defense tackle, it would make all the B.J. Raji talk for naught.