Inside the Mind of a NFL Draft Prospect: Daniel Holtzclaw

Share All sharing options for: Inside the Mind of a NFL Draft Prospect: Daniel Holtzclaw 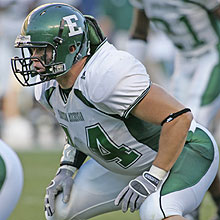 Last summer, there was a piece on Arrowhead Pride detailing how rebuilding might progress. In it, Eastern Michigan LB Daniel Holtzclaw was projected as a mid round pick by the Kansas City Chiefs.

Now, since he comes from a small conference and there's limited tape on him available, Direckshun did his best to piece together how Holtzclaw might fit into the Chiefs plans.

In Herm’s Cover 2, you need an elite MLB. Obviously, Holtzclaw does not seem to be that guy, although he might be a great backup.

Holtzclaw chided me for not following him closely enough to make that judgment (which is a completely fair point). He accused me of overlooking him because he plays in a less prominent conference, but that he was going to be extremely motivated to working his ass off to embarrass my prediction.

So, Lanier63 took the lead and we tracked Holtzclaw for the rest of the season. He was snubbed at the Combine a few weeks ago, which he admits was disappointing, but nevertheless provided more motivation to work his tail off.

So that's the Holtzclaw story for many of you newbies.

Today, we're talking Holtzclaw again. Or, more accurately, he's talking. Daniel was nice enough to answer a few questions for us as he prepares for the NFL Draft. We're going to keep up on his progress and get updates from him as April 25th-26th nears.

Let me say, after reading a few of his responses, I walked away even more impressed.  Without a shadow of a doubt, he has the mindset to play in the NFL.

My daily workout consists of waking up at about 6:00 AM and grabbing a light breakfast.  On some days (Mon, Wed, Fri) I go run at Bowen, an indoor track where our pro day is going to be held at 9:00 AM.  So, waking up at 6:00 gets my body used to waking up at an early time to perform well.

After running and practicing my technique I head home to to eat again (usually consisting of egg whites and light carbs).

My goal was to cut down weight coming into training to about 250 lbs.  I cut down to a shredded 240 and I'm running well. The less body fat = faster.

Finishing up my meal I will either take a nap or relax till about 10:00 to 12:00 where I'll head up to the convocation center (weight room) and perform my lift for the day (either upper or lower body).

After I finish my workout I usually stretch and ice (cold tub to warm tub). Some days after lift my old team will be out with the coaches where I will try to hop in with them and do linebacker drills. If not I'll practice either my 5-10-5 or 3 cone or continue working on my starts on the 40 yd dash.

When that is done I finish with a stretch again, head home eat. Replenish my body with nutrients, and relax. Finish the rest of the day/night eating making sure I'm consuming enough calories (lean meat) to not get too big but stay around the low 240's.

As far as being drafted, I hope I can sneak into mid rounds. I hope.

My overall goal is to be drafted and so far I've heard late rounds and FA. Not being in any all-star games or combine definitely hurt me, but it is what it is.

I can justify and make excuses but no one wants to hear that. I look at it like football. As you reach a higher level of play in football there is more adversity. Same goes with life. Nothing is perfect, you don't get everything you want, you only get a few opportunities in life so when your name is called be prepared to execute at the highest level possible.

They tell me I need to be something before camp, and you better believe the day I step into their facilities what they wanted is what they get. I see myself playing inside or outside as well.

I plan on running a 4.5 on my pro day. I hit a electronic 4.65 I believe a month ago so we'll definitely see here in a week.

Making A Name For Himself

As far as resembling another person in the league it's hard to say. The reason for this is because I don't want to live in someone's shadow. I want to make a name for Daniel Holtzclaw.