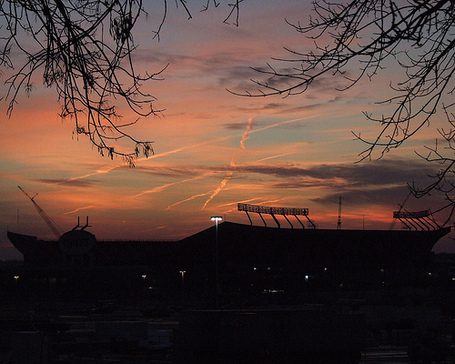 Matt Cassel and USC QB Mark Sanchez got into a fight last night- for charity.

At the University of Arkansas Pro Day, Chris Mortenson's son Alex ran a few drills for the scouts.

You just know that every NFL team attended the Auburn Pro Day because of the BBQ afterward.

Even though the meeting between Bronco team officials and Jay Cutler apparently went smoothly, Cutler still thinks that it is likely that he is going to be traded before draft day. Mile High Report has more.

JayKC posted a FanShot on this last night- LaDainian Tomlinson is staying in San Diego.

The Raiders are not relevant. There is nothing to link to.

Behind the Steel Curtain has the most thorough post I've ever seen on what team had the NFL's greatest defense of all time. The 1977 Falcons? May be.

You know Alex Smith knows his role when he agrees to a restructuring of his contract that "greatly reduces his base salary" instead of leaving for another team.