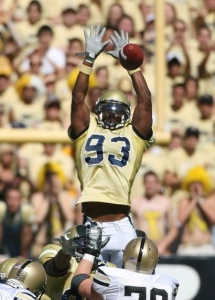 As we've noticed with the Kansas City Chiefs offseason coaching search, sometimes knowing the right person is just as important as your, you know, actual job qualifications. Keeping this in mind, I wanted to highlight Georgia Tech's Pro Day which took place yesterday.

Chan Gailey is the former head coach of the Yellow Jackets and the Chiefs spoke with draft prospect Andrew Gardner at the NFL Combine so we have plenty of reason to think that the Chiefs are interested in taking a closer look at one, or a few, of the prospects that worked out.

With 26 teams (and two head coaches) attending yesterday's workout, we can make a safe assumption that the Chiefs were one of them.

A few of the participants we should keep an eye on are listed after the jump.

Michael Johnson was the star of the Georgia Tech Pro Day. He's being viewed as a late 1st/early 2nd round draft choice.  At 6-foot-6 7/8 and 266 pounds and 40 times in the 4.61 range, consider him in as a rushing linebacker in a 3-4. Of course, the Chiefs don't have a 2nd round pick so he is likely out of the picture. 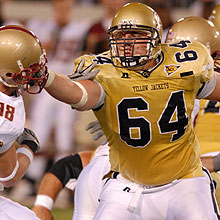 Remember Georgia Tech OT Andrew Gardner? He interviewed with the Chiefs at the NFL Combine.  He seems to have the size (6-foot-6 305 pounds) for tackle in the NFL.  Anyway, he participated in all drills at today's Pro Day except for the bench press. He tore his labrum towards the end of last season but he still ran the forty in a shade under 5.0 (4.99).

According to his agent, he'll be ready to participate in all mini-camp drills once he's drafted. 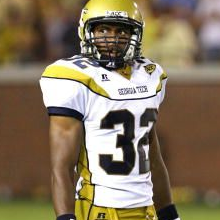 Jahi-Word Daniels  is a 6-foot 1/8th 191 pound corner coming out as well.  He placed second among all defensive backs at the NFL Combine with 24 reps on the bench press.  He's certainly got the big and strong part down.

According to Gil Brandt of NFL.com, he ran the forty in a high of 4.59 seconds but didn't participate in all drills because of a left groin injury 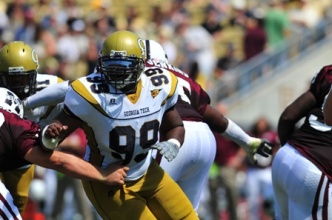 Vance Walker is a defensive tackled that measured in at a shade under 6-foot-2 and weighed in at 304 pounds.  They say he's better suited for a one-gap defensive system.

The concerning part is a drop in production from his junior to senior year. 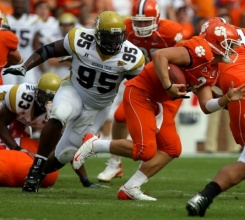 He's projected to be anywhere from a 7th round pick to an undrafted free agent.