Chiefs Special Teams Unit One of the Worst in the NFL

Share All sharing options for: Chiefs Special Teams Unit One of the Worst in the NFL 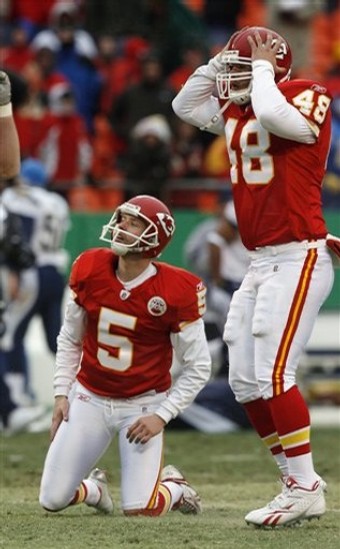 Rick Gosselin of the Dallas Morning News compiled quite a bit of data based on the 2008-2009 season to measure the best and the worst specials teams units in the NFL.

Click through to see how the Chiefs fared (not well) in comparison to the rest of the league.

*A quick side note before we get to the Chiefs and why they're so low on the list. I bolded the playoff teams because I was somewhat surprised that special teams as a whole isn't any kind of indicator as to how successful a team will be. 6 playoff teams ranked in the top 13 of league and 6 ranked in the bottom 20. Maybe there's nothing to it but I thought it was interesting to note.

The Chiefs were the fourth worst team in the NFL. Much of that can be contributed to the return game that featured four players at one point or another throughout the season (Dantrell Savage, Kevin Robinson, Jamaal Charles and B.J. Sams).

Since B.J. Sams is not on the team anymore (!!!), let's take a look at our two primary punt returners last season, Dantrell Savage and Kevin Robinson, both of whom appeared in 8 games.

Not too impressive. The lack of actual returns makes me suspicious of the coverage team. With punt returns, it's definitely a joint effort. The return man usually has to make at least one man miss to gain anything of substance. Collaboratively, the coverage team has to give him something after he makes the first guy miss. Judging by these stats, someone wasn't doing their job.

Now to the kick return game. Again, since B.J. Sams is off the team now (!!!), we'll focus on Dantrell Savage, Kevin Robinson and Jamaal Charles.

Things don't look so bad here. Kickoff returns don't vary much around the league. Last year Tennessee led the league with 25.4 yards per return while Green Bay was the worst with 20.1 yards per return. 5 yards may not seem like much, but it does make a difference, especially with an offense like the Chiefs that had trouble scoring at times. Not to sound too much like Herm here, but those 5 yards could be the difference between a 40 yard field goal and a 35 yard field goal (which, once you look at the stats below, could actually mean something for the Chiefs).

The Chiefs definitely improved in the kicking game once Connor Barth replaced Nick Novak. Though Barth's future with the Chiefs is still a question mark, his performance clearly beat Novak's.

I say Barth's future on the team is definitely in question because he's still got plenty of tests to pass. With only 2 attempts beyond 40 yards, consider him an incomplete at this point. Besides, the difference between the highest rated kicker in the league and the lowest rated kicker isn't much so the turnover rate is high.

Our punter, Dustin Colquitt, is the only real positive to come out of this statistical ranking. He netted 44.4 yards on his punts in 2008. I won't spend much time discussing him because he's not going anywhere and I can assume we're all pretty happy with his performance.

The Chiefs finished last in the NFL in two of Gosselin's categories that helped comprise this list:

Who is responsible for the Chiefs special teams woes?

Mike Priefer. Luckily for us Priefer has been plucked (plucked?) by the Denver Broncos to man their special teams unit. Click here to see what AP had to say about Priefer when Styg50 from Mile High Report asked about him.

Priefer came on board in 2006 with Herm Edwards so it's no surprise that he's gone when that and the Chiefs special teams ranking is taken into account.

With Priefer gone, the Chiefs can start fresh. Kevin Robinson appears to be promising in the kicking game, which he should be considering he was drafted as a return specialist (even if it was in the 6th round). Connor Barth is a big maybe at this point in the kicking game.

I'll say Dustin Colquitt is the only player who is guaranteed to make it through the regime change unscathed. Barth and Robinson were primarily special teams players (unlike Savage and Charles who I won't count here) and they've got no guarantees they'll be around next season considering they helped comprise a special teams unit that ranked 29th in the NFL.

An example of "getting it right"

Keeping with Scott Pioli and Todd Haley's theme of "Getting it Right", I wanted to include a quick example of one team that has gotten it right when it comes to special teams. Bobby April is assisted by DeMontie Cross in the Bills special teams department.

The Buffalo Bills have topped Gosselin's special teams rankings 3 of the last 5 years. Their kicker (Rian Lindell) and punter (Brian Moorman) are two of the best in the league.

Where the Bills have shined as well is the return game. Rookie Leodis McKelvin had an excellent season scoring one touchdown and averaging 28.2 yards per return. The punt return game is equally as impressive with Roscoe Parrish adding another touchdown on 15.3 yards per return. Both of those numbers are near the top of the NFL.

How long has special teams been a problem?

The Chiefs special teams unit has gone from one of the best (2003) to one of the worst (2008) in just 6 short years. Let's take a look at how the Chiefs have fared in comparison to the rest of the league in 3 major special teams categories over the last 6 years.

So, while special teams coaches won't get much publicity or credit, they do have influence and many of them aren't just fillers. They can be good coaches who can add a lot to a team.

The special teams coach is a position that will be filled by Todd Haley hopefully within the next week to two weeks.