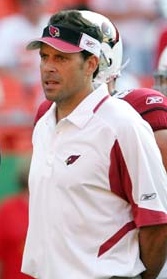 It looks like this is going to be a done deal very soon. From FOX Sports Jay Glazer:

The Kansas City Chiefs' long road to finding a head coach is finally coming to a close.

FOXSports.com has learned that the Chiefs have offered the position to Cardinals offensive coordinator Todd Haley and he has accepted.  They are now trying to work out terms of a contract agreement.

Haley interviewed for the position earlier this week and a Cardinals player at the Pro Bowl told FOXSports.com Haley was scheduled to arrive in Honolulu for the Pro Bowl Thursday as a guest of Cardinals wideout Larry Fitzgerald, but canceled at the last moment because of the Kansas City job.

"He's going to be a big loss for us," another Cards player told FOXSports.com.

After nearly two weeks of waiting, it appears that the Kansas City Chiefs will have their new head coach.

Once it becomes official and they figure out the contract details, we have a big Haley post coming up for you. Note: It's official now in that Haley has accepted the post. Post has been updated.