Chiefs TE Michael Merritt Arrested: 'All this for a little bit of weed?'

Share All sharing options for: Chiefs TE Michael Merritt Arrested: 'All this for a little bit of weed?' 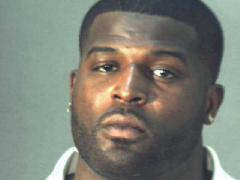 Excuse me, officer?  I'm ready for my PB&J sandwich now.

The doldrums of the NFL offseason have already caught up to one Kansas City Chiefs player. Tight end Michael Merritt, the Chiefs last selection in 2008 NFL draft, was arrested early Thursday morning for possessin' the dope.

Marijuana possession, that is. Per KMBC.com the incident occurred in a silver Dodge station wagon in downtown Orlando, FL.

According to police, officers spotted Merritt rolling a marijuana cigarette in the car at 1 a.m.

The officer reported that he saw Merritt put a cigar-shaped object into his mouth. He ordered Merritt to get out of the car and spit it out.

So, for a guy like Merritt who was the 239th overall selection in the 2008 draft with no playing time his rookie season due to injuries this probably isn't the best time to be smokin' the dope.

The money quote comes from the police report which can be viewed here.

At this time I observed the defendant in the front passenger seat make eye contact with uniformed police officers, then take a cigar shaped object and shove it quickly into his mouth.  I quickly approached the passenger side of the vehicle and told the defendant to get out of the car.  As the defendant got out I said, "Spit it out!"  The defendant complied and spit out a brown cigar like object on the ground.  The defendant then spontaneously stated, "All this for a little bit of weed?"

Yes, Mr. Merritt, your 3 grams of weed will cost you $250, public embarrassment and quite possibly your job.

According to the NFL's substance abuse policy, the Chiefs can't discipline and/or release Merritt based on this incident.  Any discipline will come from the NFL offices.

H/T oldchiefsfan in the FanShots