Morning Conversation (The Raiders are Back Edition)

Share All sharing options for: Morning Conversation (The Raiders are Back Edition) 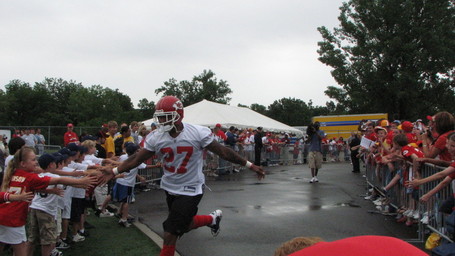 It wasn't all bad with Larry Johnson (via i449.photobucket.com)

I find it entertaining that Larry Johnson is the big Chiefs news topic right now, when all he did was basically repeat what he said after the final game of the season. Albeit, he did play Scarface clips and made himself out to be more of a victim than his final season press conference. I'm much more interested in finding out who the next head coach is than talking about Larry Johnson and I suspect most of AP's readers are too.

Keep in mind that the Yahoo! Sports article yesterday on Tony Gonzalez said that TG expected to know who the new head coach is by today. That doesn't necessarily mean that the public will know but it's certainly a step closer.

I've got a strange feeling that we're going to find out today or tomorrow who the new head coach is. And if you've noticed, these big announcements almost always come in the afternoon, usually around 4 PM central time. Here are some links to tide you over.

Here are a few Larry Johnson mentions in the KC blogosphere: Upon Further Review- Larry Johnson: A Divorce Made in Heaven and Arrowhead Addict is all over yesterday's comments, complete with photoshops and videos. Gotta give Adam props for admitting he was wrong on the guy. Not everyone does that.

We wish him the best but it was too ironic not to mention that Brodie Croyle's dad injured his shoulder in an skiing accident. H/T Chiefs Planet.

This picture reminds me of my greatest college achievement- Beer Plinko.

WPI is talking about drafting quarterbacks.

New Raider coach Tom Cable: "The Oakland Raiders are back." I, I don't know what to say.

I have to say that since moving to Austin, I can't blame college football recruits for wanting to go somewhere warm.

Remember when it was so obvious to us fans that the Chiefs should have drafted Mason Crosby over Justin Medlock in the 2007 draft? Well the Packers are now bringing in competition for Crosby, who ranked 28th last year in field goal accuracy.