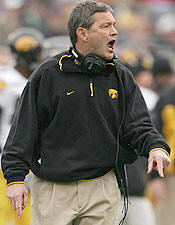 University of Iowa head football coach Kirk Ferentz broke his silence to reporters in his state regarding the rumors that he is a finalist for the Kansas City Chiefs head coaching job.

The Ferentz to Kansas City rumor mill stopped churning a couple weeks ago once Todd Haley's name was thrown into the ring.  Michael Smith of ESPN revived the rumors earlier this week when he speculated that Ferentz's name could come into play following college football's national signing day (which is today, by the way).

ESPN.com has the scoop:

But Ferentz told ESPN.com senior writer Ivan Maisel on Wednesday that he's "not an entrant in the race." The Iowa head coach also told Maisel that having his son, James, a redshirt freshman offensive lineman, in the program is a "big factor" in his career outlook.

Although it's speculation on my part, I would imagine Ferentz and Pioli have spoken and the Chiefs GM told him he's close to hiring his guy (and it's not Ferentz).

I would venture to guess that the timing of this indicates that Ferentz was a legitimate candidate in Pioli's mind to be the Chiefs next head coach.  In the weeks approaching national signing day, why would Ferentz not publicly commit to staying at Iowa?  Unstability at the head coaching position can drastically affect the decisions of recruits.  The rumors have been out there for weeks (and months?) and they've almost assuredly been heard by Ferentz's recruits.  His silence on the issue certainly had to make more than a few potential Iowa signees nervous.

My best guess is that the Chiefs next head coach will be named in the late afternoon either tomorrow or Friday.