Tony Gonzalez is Pissed Off

Share All sharing options for: Tony Gonzalez is Pissed Off

Note: One little tidbit I left out of this post was that Jason Cole of Yahoo! Sports, who wrote the linked article, says Tony Gonzalez expects to know who the next Chiefs head coach is by Thursday. As in tomorrow. 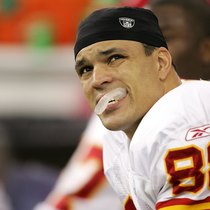 Back in mid October, Tony Gonzalez waited expectantly to be traded by then Kansas City Chiefs GM Carl Peterson. The rumors of an asking price of a 2nd round and a 5th round pick were too steep for Gonzalez's potential suitors, namely the New York Giants.

Gonzalez was angry with the Chiefs, feeling that Carl Peterson's hardball had left him in the cold for his last desire- a Super Bowl championship.

Of course, with TG having another incredible season last year, you can expect the "Trade me" demands to increase. Not even the absence of Carl Peterson, who was the stalwart in halting the TG trade deadline deal, seems to calm Gonzalez down. He pretty much wants out. This is from the Pro Bowl yesterday:

"You can go from being really bad one year and all of a sudden be really good the next year. So you have to factor that in. We have a young football team that could be really good out there in Kansas City. Now, the question is, are they going to make it to a Super Bowl? Like with Jason [Taylor], even if he’d have stayed in Miami, yeah, you could be good. But I don’t care about being good. I want to be great. I want to win a Super Bowl."

Call Tony's interest in staying in KC mild, no matter who the head coach is. From the player's hotel at the Pro Bowl:

Those are by far the strongest words that Tony Gonzalez has used in regard to leaving Kansas City. Is is just me or do you sense that Gonzalez is getting angrier and angrier and doesn't want to come right out and say trade me? He's being a bit diplomatic, I'll give him that.

I say we trade Tony Gonzalez for a few reasons. One is that dissension like this in the locker room helps no one, even if the dissenter is a future Hall of Famer. Pioli is going to want his first year to run as smoothly as possible and a yapping Tony Gonzalez won't ruin the season but he'll make things uncomfortable.

Second, Tony's trade value will never be higher. Even if he has another 100 catch season with the Chiefs, one more year added to that 32-year old body decreases TG's longevity and his trade value.

Finally, and this is the weakest argument, the guy deserves a chance to win a Super Bowl and that isn't happening in KC in the foreseeable future. The Chiefs don't owe Gonzalez anything- he's been paid handsomely for his efforts. But you have to admit, as a fan, it pulls on your heart strings a bit to see the Greatest Chief pining for something he can't get right now with the current team.

Vote in the poll below to let us know how you think. Pretty sure we've talked about this before...