Share All sharing options for: Placing a Value on the Chiefs 3rd Pick in the NFL Draft 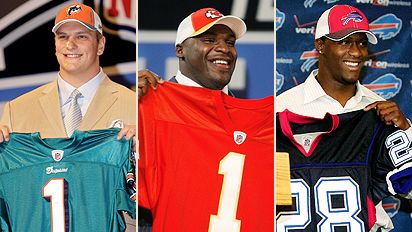 Primetime did the leg work on this post and I added the intro. -Chris

Unfortunately (or fortunately depending on your view), the Kansas City Chiefs find themselves in familiar territory in the 2009 draft with another top five pick.

Every year, fans of teams with high picks point out the obvious move- trade that high draft pick for more draft picks and move down to still get the player we want!

Alas, if it was that easy.

As guaranteed salaries have increased, trades in the top five slots of the draft have been the rarest, with swaps increasingly common only once you get outside of the top ten.

As far as placing out a value on the Chiefs #3 pick, you can go by the Draft Pick Value Chart a straight number comparison or you can take a look after the jump at the last ten years and see what teams have traded for their top ten draft picks. Sure, the Draft Pick Value Chart may say a pick is worth XYZ other picks, but it only takes one stupid team (cough Lions cough) to gamble on a player who they simply must have.

Teams panic. Players get overhyped. It's the draft baby!

If Matt Cassel is franchised at the non-exclusive tender, then the Chiefs would have to give up their 3rd overall pick in 2009 AND their 2010 1st round draft pick.  Absent a trade, this is the price a team would have to pay for Cassel's services.

This isn't exactly the best example of a draft day trade.  The Redskins absolutely fleeced the Saints.  A lot of folks would call this the worst trade in NFL history. This has nothing on the Herschel Walker trade (H/T UC).  Good call, Mike Ditka.

Perfect.  This is exactly what I want the Chiefs to do.  Only problem is that the top few picks in the draft have been becoming less and less valuable due to the financial demands that come with it.  But I would be ecstatic if Pioli and Co. could strike a deal like this.

With more than a few teams possibly clamoring for Michael Crabtree's services, wouldn't it be nice if the Chiefs could move back 3-5 spots, still get the guy they want at a cheaper rate AND pick up an extra 2nd rounder?

Yikes! A 3rd and a 6th to drop back 2 spots?  At least the Chiefs shored up the defensive tackle position with this pick.

Another good example of what the Chiefs could expect in a trade where they move out of the top 10.

6th overall turns into two picks in the teens.  Again, for a team like the Chiefs with more than a few holes to fill, this is the best case scenario.

Hope Kellen Winslow, Jr. has been worth it, Cleveland.

A bit scary to think that Schaub had started 2 games prior to this trade.  Cassel excelled in 15 starts.  Hmm...

*Note: 49ers made this trade in 2007 but it wasn't complete until 2008.  The 1st rounder they traded was conditional and happened to be very high in 2008 after a disappointing 2007 campaign.

Take a look at the draft order and let us know if you see any potential trades.