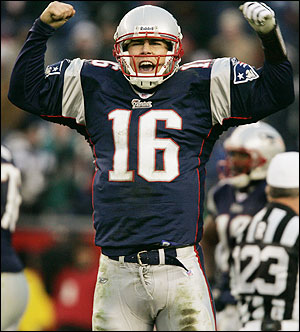 Terms of the trade weren't immediately disclosed.  And this is coming from Adam Schefter, not you-know-who so we know it's legitimate.

The Chiefs gave up their second round pick (#34) for Cassel and Mike Vrabel.

“I have a long history with both players,” said Kansas City Chiefs General Manager Scott Pioli. “Mike and Matt are men that I respect both personally and professionally. I look forward to having them as new members of the Chiefs family.”

"When Mike arrived in 2001, we knew we were adding a solid outside linebacker,” Belichick said. “But where Mike took it from there exceeded our highest hopes. Mike Vrabel epitomizes everything a coach could seek in a professional football player: toughness, intelligence, playmaking, leadership, versatility, and consistency at the highest level. Behind the scenes, Mike's wit and personality is one of the things we have all enjoyed about coming to work every day. "The toughest aspect of my job is the day I stop coaching people like Mike, who did everything in his power to contribute to team success. Of all the players I have coached in my career, there is nobody I enjoyed working with more than Mike In the same way people recognize guys like Troy Brown, we appreciate and thank Mike Vrabel. He is one of the very special Patriots champions."

"It is very easy to root for guys like Matt Cassel, who do everything the right way and flourish as a result. As much as we would have loved to continue working with Matt, we wish him nothing but the best as he takes this next step forward in his career."

How good of a deal is this for the Chiefs?  NBC pointed out two other quarterbacks who were traded for a 2nd round pick: