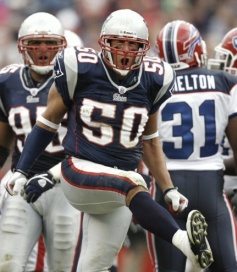 Adding to JayKC's FanShot about this topic (and opening up a new thread on it), the Kansas City Chiefs have traded an undisclosed draft pick for New England Patriots' LB Mike Vrabel.

A third round pick out of Ohio St. in 1997, Vrabel was converted from defensive end to linebacker when he entered the NFL. Vrabel played his first four NFL seasons in Pittsburgh before heading to New England in 2001.

Throughout his career, Vrabel played both inside and outside linebacker in the Patriots modified 3-4 defense. The addition of Vrabel may be an indicator that the Chiefs are planning to switch from a 4-3 defense to a 3-4 defense. The veteran Vrabel would be an ideal candidate to help the younger Chiefs adjust to a new defensive scheme.

Vrabel has 55 sacks and 11 interceptions in his career, along with one Pro Bowl selection in 2007.

The quality of this trade will depend entirely on what draft pick the Chiefs gave up for Vrabel.