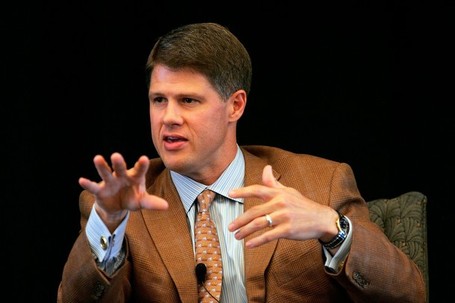 Kansas City Chiefs owner Clark Hunt spent some time on a conference call with season ticket holders last night outlining the Chiefs' plan leading up to the season. Thanks to a tip from Elway's least biggest fan in this FanPost I was able to listen to parts of the call.  Also, CALIFAN1986 was kind enough to provide a quick review of Hunt's call.

We'll go over a few of our owner's main points here.

Brodie Croyle will be back in 2009

This isn't much of a surprise considering he's entering the final year of his rookie contract.  At $530,000, Croyle is an inexpensive backup that likely won't return in 2010 barring any significant injury to the two quarterbacks that are likely to be ahead of him on the depth chart.

When he signed a 4 year contract on July 28th, 2006, many of us expected him to be the quarterback of the future.  Little did we know that the injury history that plagued him in college would continue to haunt him (Actually, we should have known. The writing was on the wall).

The "future" label has been replaced with a bandage and there's no reason to think he'll be back with the team following the 2009 season.

Hunt said the Chiefs won't be active in the early goings of free agency.

With most of the current crop of top flight free agents either A) resigning with their team (Channing Crowder) or B) asking for too much money (Albert Haynesworth), the Chiefs will, as expected, look for the value free agents.

GM Scott Pioli made a career out of these types of moves in New England so expect the Chiefs to do the same in 2009.  When the time comes, we'll be active in free agency. But just because the free agency period is about to start, doesn't mean we have to reach on the limited talent available.

An elementary economic rule applies here: When the supply is low, the demand is high. In this case, the demand means overpaying. And when you're working with a limited amount of money (i.e. salary cap), overpaying can be devastating.

Tyler Thigpen will apparently be given the chance to start in 2009 but it won't be without competition.

At this point, I don't see anyone the Chiefs could draft that would be able to initially beat out Thigpen for the starting job. Pioli's past history doesn't bode well for those folks looking to draft a quarterback with the 3rd pick.  That's not to say he won't, but even a Matt Stafford or Mark Sanchez likely can't beat Thigpen in a camp competition in 5 months.

If we go the route of free agency, there are a few names that could push Thigpen in a camp competition.  Names like Jeff Garcia, J.P. Losman or Byron Leftwich come to mind when looking at the current crop of free agent quarterbacks.

If a veteran is added through free agency, and beats out Tyler Thigpen, then his career with the Chiefs will likely be relegated to backup role.

That said, I fully expect Thigpen to be the starter come September. His experience in the system and success with offensive coordinator Chan Gailey make him the front runner at this point.

Captain Obvious sighting here. Though I think many of us knew (or hoped for) this, it's good to hear it come straight from our owner's mouth.

If we want to step into speculation zone, then this could be construed as an endorsement for the ArrowSpread since that was the only offense that consistenly generated points for the Chiefs last season.

In addition to that, we haven't really changed any personnel on offense so why would a focus on offense include anything but the ArrowSpread?

Amen. Though the old adage "defense wins championships" may not ring as true as it once did because the league is becoming increasingly focused on the offense and the passing game, it's imperative to have a defense that is average to above average.

One side of the ball has to be great and the other side has to be at least average to be legitimate Super Bowl contenders.

As I think about what moves the Chiefs may or may not make come Friday night when the clock strikes 12 and free agency begins, I'm reminded of the 'plug-n-play' approach by the New England Patriots.

If the Chiefs don't sign the biggest fish in the pond, don't beat the owner of the pond over the head with your fishing pole. As one AP commenter pointed out, we don't necessarily want to sign the top free agents, we want to make the top free agents.