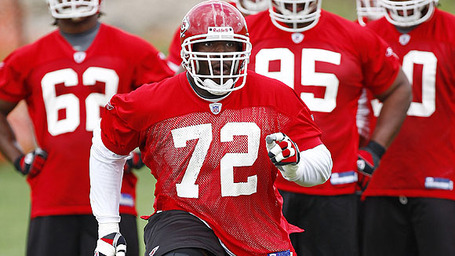 Is Glenn Dorsey big enough to be a 3-4 nose tackle?

With the Kansas City Chiefs possibly preparing for the possible switch to the 3-4 defense, it's becoming more apparent that they have some serious work to do on the personnel side. This means adding more players, specifically linebackers, in order to effectively employ the defense that has gained so much popularity in recent years.

From a technical stand point, the nose tackle must occupy the center and the strong side guard. One defensive end will take on the weak side guard and the tackle while the other end will occupy the tackle and the tight end. Doing this correctly will free up rushing lanes for linebackers.

Why should Collier's opinion on this be of utmost importance to Chiefs fans clamoring for any information on the new defensive scheme? Let me show you the connection.

Bill Belichick often credits Collier with being the one who first showed him the 3-4 defense. The same Belichick that worked with Scott Pioli in New England for 8 years. Presumably, Pioli learned the ins and outs of 3-4 personnel from and with Belichick.

That said, Pioli (via Collier and Belichick) understands the importance of the nose tackle in a 3-4. Like the man who helped build the Orange Crush defense said, first you find the nose tackle, then you fill in the gaps.

Nose tackle may not come from the draft

Think about this. One of the first things Bill Parcells did when he came to Miami was trade for Jason Ferguson, then a 33 year old, 11 year veteran nose tackle. By the "youth movement" standards we've become accustomed, Ferguson's name wouldn't even come up around here.

For the 3-4 to work, the Chiefs need someone ready to play immediately. If we throw in another young and inexperienced player, or someone undersized, we're asking for trouble.

As far as the draft goes, there are two players that could conceivably step in and play fairly quickly: B.J. Raji and Ron Brace, teammates from Boston College. Since this is a weak class for defensive tackles, especially 3-4 tackles, it's unlikely both will be available with the Chiefs second pick. Brace has the best chance of being available with the 35th pick.

We'll be taking a closer look at both of these players in the coming days.

Why not Glenn Dorsey?

Size is the biggest impediment here. Dorsey is listed at 6'1", 297 lbs. although he entered the combine at 316 lbs just last year.

Ideally a 3-4 nose tackle is bigger (and stronger) than Dorsey. Some of the best include:

Take a look at a few of the perceived weaknesses in Dorsey's game by NFL scouts when he entered the league:

Not the scouting report you want to hear for a nose tackle in a 3-4.

Other candidates for nose tackle

Tank Tyler comes to mind. He's listed at 6'2", 306 lbs so he would certainly have to put on some weight. But if you'll recall he led all defensive linemen in bench press reps demonstrating some raw strength.

Shaun Rogers is apparently begging out of Cleveland. It's been reported that he doesn't want the team to pay him a $6 million bonus next month, instead releasing him outright although that's part of $15 million guaranteed due to him. Reports out of Cleveland, however, indicate that the Browns (also a 3-4 team) aren't likely to release him.