Talking about the Chiefs' Spread Offense

Share All sharing options for: Talking about the Chiefs' Spread Offense

We've been talking about the Kansas City Chiefs possibly switching defensive schemes from a 4-3 to a 3-4 formation quite a bit around here lately (and it's something we'll have more on too). The NFL Combine and Wake Forest LB Aaron Curry especially have geared our interests towards the defense. The Chiefs will need at least three more serviceable linebackers in a 3-4 defense on top of Derrick Johnson in order to run it successfully. This may happen this year. This may happen next year. Or never at all. I keep forgetting that everything we hear now out about the Chiefs is hypothetical.

But what about the offense?

Chan Gailey jerry-rigged the Pistol offense last year for Tyler Thigpen and co. and that formation is far from a settled upon for 2009 (At least that's what I suspect) despite its success. In 11 starts last year, partially running the Pistol offense, here are Thigpen's averages:

From Week 9 on, when Thigpen became the full time starter and the Pistol was introduced, the Chiefs averaged 340 yards and about 23 points a game. Before that, they barely managed 270 yards and 19 points a game.

Yes, you already knew this. The Pistol offense was fun to watch but it didn't really lead to wins. And to be fair to the team, like I said before, the offense was thrown together in the middle of the season.

Was the Pistol like triage for the offense? Was it the only thing Chan Gailey could do to keep the team from keeling over? Or is the spread/Pistol formation a legitimate formation the Chiefs will run in 2009?

Like with the 3-4 or 4-3 defenses, the Chiefs need to make sure they have the personnel to successfully run the schemes they want. For the spread, Pistol offense, whatever you want to call it, Thigpen seems to be a good QB for it.

Pick a scheme, draft the right players for it

But the Chiefs don't really have any other "spread" type players to facilitate a full blown transition to a full Pistol offense, or at least to running the Pistol 10-15 times a game.Tyler Thigpen appears to have a good combination of skills to run the spread but the nice thing is he can also line up under center and still play just like a normal QB. He doesn't have the gadgety, wrinkle in his game to put a spread offense over the top. We also don't have a real running threat in this spread offense.

The defensive and offensive schemes will affect who the Chiefs draft. 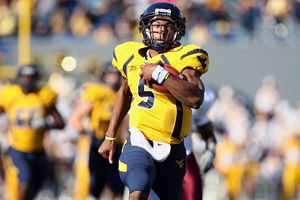 Which is why I want to talk about senior West Virginia QB Pat White. He could be that rushing wrinkle the Chiefs need.

The Moutaineer was the leader of a WVU spread offense that produced quite a bit of offense over the last three years. Here are White's stats for his college career, with the averages only including his final three years as a starting QB:

A couple things stand out to me immediately. First, White has that magical 60+% completion percentage we like to zero in on here at AP. Second, he is a three year starter at a big time football school. He has lots of experience, especially running a spread offense. Finally, for the most part anyway, White has shown improvement over his starting three years. Yes, his INTs and sacks went up in 2008 but remember WVU did lose star running back Steve Slaton to the NFL so a drop off in White's stats isn't really a concern to me.

Any concerns about arm strength from the 6' tall, 190 pound QB were seemingly dashed at the Combine this past week. Here's what NFL analyst Mike Mayock said about White:

"Pat White threw the hell out of the ball."

Well, you can't put it much clearer than that.

I really like Pat White a lot. And so do a lot of other people which means that the Chiefs may have to use a 3rd or even 2nd round pick to get him. That is a steep price for a player who isn't necessarily full time.

We'll delve into Pat White more over the next few weeks (Remember the Chiefs spoke with him at the Senior Bowl) but for now, I wanted to put that bug in your ear about the offense. The Chiefs still haven't really settled on a formation on either side of the ball and they'll need to do that (Perhaps they have) before the draft.

If we don't hear any more about the Chiefs' plans on offense or defense, the players the Chiefs draft in April will be a big indicator about the direction we're going.