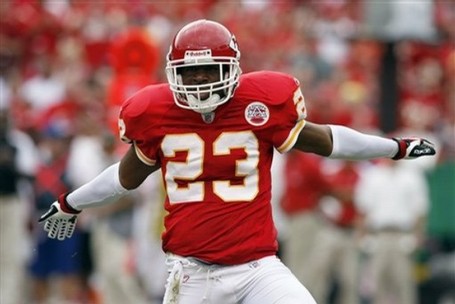 Surtain had $7 million due to him in 2009 so it's no surprise that the new regime has decided to part ways with him.  The move will free up $6.184 million in salary cap room.

The Chiefs acquired Surtain from the Miami Dolphins prior to the 2005 season in exchange for a 2nd round draft pick.

Schefter also speculates that veteran linebacker Donnie Edwards could be the next cap casualty.

Surtain, 32, isn’t expected to be the last Chiefs player released before Friday. Veteran LB Donnie Edwards also could be in jeopardy, as he is scheduled to make $5 million in base salary. If he is released, it would free up another $4.5 million in salary-cap savings.

The Chiefs were already sitting pretty in regards to salary cap room for the looming free agency period. If we do cut Edwards, that will free up over $10 million MORE in salary cap.