Aaron Curry Has Been Tearing It Up At NFL Combine

Share All sharing options for: Aaron Curry Has Been Tearing It Up At NFL Combine 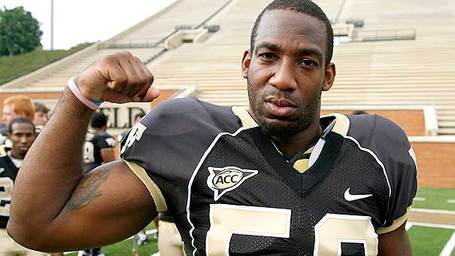 Aaron Curry has been shooting up draft boards and for good reason.  NFL.com gives us a few reasons why he might be the 3rd overall pick come April 25th:

An explosive athlete with a penchant for the big play, Curry broke onto the national stage in 2007, posting 99 tackles, including 13.5 behind the line of scrimmage and three interception returns for touchdowns (he had four picks overall) during the season. Despite increased attention from offensive coordinators, Curry was even better in 2008, leading the team with 105 tackles, including 16 tackles for loss. Capable of making plays at every level of the defense, Curry - not Rey Maualuga or James Laurinaitis - is the most versatile linebacker in this class and likely to be the highest drafted come April.

Let's take a look at how Curry has fared in a few drills.

Mile High Report has some outstanding coverage of the draft. They also talk about a formula of measuring players which I haven't really heard of before.  Here's what they say about the formula for powerful players.

This formula is pretty simple:  combine the number of bench-press reps, the vertical jump, and the broad jump of a player together.  If the total is 70+ you may have someone special on your hands.  For example, Chris Williams was ranked as the #3 OT last year behind Clady and Long.  By this measurement however, Williams' score of 54 lags significantly behind Long at 74 and Clady at 77.  One way of honing this measurement down a bit is to disregard any player with only one significantly-high score.

If the Combine means anything, then Curry has been as good as advertised so far.