Share All sharing options for: Chiefs Shouldn't Expect any Primetime Games in 2009 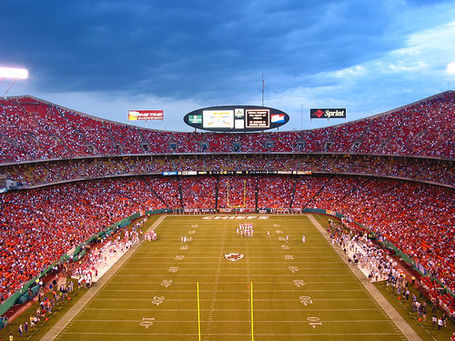 If the Kansas City Chiefs are hoping the NFL schedule makers are going to put them on primetime, it won't be because of the way they've played recently. It will be because of their opponents. Inspired by this post by mistamic, I decided to accumulate some numbers on the 2008 NFL schedule and how many, if any, primetime games we can expect.

The Chiefs play the AFC North and the NFC East this season, the two divisions with the most scheduled primetime appearances in 2008.

In 2007, the six teams that finished last in their division were scheduled for 12 primetime games, with 9 of those for Philadelphia (4) and Chicago (5). Why so many appearances for these two teams, both of which finished dead last in their respective divisions the previous year? Well, one factor could be how competitive the NFL schedule makers expect them to be.

Another factor, which I believe plays a heavy role in schedule making, is the fact that Chicago and Philadelphia are the 3rd and 5th ranked media markets in the United States, respectively.

We've discussed the lack of national coverage the Chiefs get. As of late, it's been due in large part to the fact that we suck. The NFL doesn't want meaningless games in the most profitable spots on TV. However, the fact that there are 21 cities with NFL teams with bigger media markets than Kansas City and the Chiefs doesn't help.

The bottomline is that until the Chiefs are good on a yearly basis again, don't expect to see them on primetime. Kansas City's 27th ranked media market won't be garnering any primetime games on its own.

Click through to see how many primetime games each team received in 2008 (broken down by division to show the East Coast bias) and a short compilation of the Chiefs on primetime dating back to 1990.

*Note: This is a list for scheduled primetime games. NBC's flex scheduling changed many of the Sunday night games from week 9 on.

**Note: Teams are listed in order of their 2007 divisional finish.

How many primetime games can we expect from the Chiefs this season?

Maybe one, at best. We have a new head coach and almost a completely new front office so that may be enough to get us into one primetime game. More than likely, however, our best chance at a Monday, Sunday night or Thursday game is because we'll play the primetime-heavy NFC East this season.

Just for fun take a look at the Chiefs scheduled primetime games since 1990. Note that I did not include Sunday night games on this list (mostly because my source didn't include times of games, just days).

So, if the trend continues, don't expect any primetime games from the Chiefs in 2009. The NFL schedule should be released 1-2 weeks before the draft.

I have been to one Monday night Chiefs game.  When I was younger, my old man would get two tickets to a game around my birthday (in November). In 1996, he was able to get tickets to the October 7th game against the Pittsburgh Steelers on Monday night.

What an experience Monday night at Arrowhead is. We lost the game 17-7 but the anticipation was unbelievable. Both teams were coming off huge years. We were 4-1 entering the game and the Steelers were 3-1.

Even though we lost that's probably the best game I've ever been to at Arrowhead.