Share All sharing options for: Today's Notes from Todd Haley's Media Session at the NFL Combine 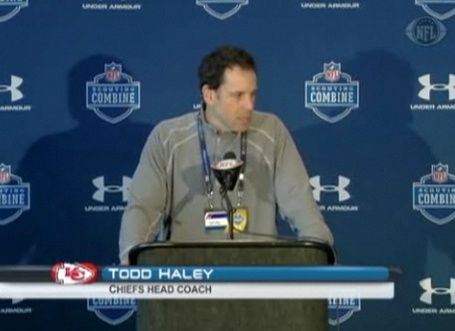 Wearing a sweatshirt and wrinkled khakis, Todd Haley addressed the media at the NFL Combine earlier today. In what is becoming the norm in Kansas City, he answered questions without really giving us any information.

Nonetheless, let's take a look at a few of his comments and see if he is dropping any hints about what we can see with the Chiefs next season.

On the fate of the current roster:

I think this is true to an extent but Haley obviously comes in with certain expectations and there is assuredly players currently on the team that don't meet his expectations. With such a young roster, Haley will look to last year's abysmal performance and make some changes.

This is a PC answer. Larry Johnson, by all accounts, doesn't have much of a future with the Chiefs. As Bill Williamson of ESPN speculated earlier this week, I think LJ should be moved within the first two weeks of free agency.

Before the reports that surfaced today regarding Michael Crabtree's injury, I would have thought this meant Crabtree is in play. But his injury precludes him from working out at 100% until around draft time so I don't expect the Chiefs to take a gamble on somebody they haven't "methodically" evaluated.

Priority number one is the coaching staff:

The fact that he's not done with the staff might lend some credence to the speculation that someone like Romeo Crennel is still being pursued.

As you all know, I'm a big Gailey supporter. I want him on the coaching staff AND I want him calling plays. Though the latter has yet to be decided, it's a good sign that Haley is responding well to Gailey.

Regarding calling plays, I'm on record (though Chris beat me to it) as saying I think Gailey can effectively call the type of game that Haley wants. This would help with Haley's transition to being a first time head coach. 72% of you agree that Haley shouldn't call the plays in his first year.

Some semblance of urgency in that last statement which is good to hear. This process has been more reminiscent of the turtle rather than the hare.

Where have we heard that before? Both Pioli and Haley talking points in their initial press conferences with the Chiefs media.

I wish there were some follow up questions to this because it doesn't quite answer the question many of us want to know: Is Albert going to stay at left tackle? If so, that answers some of our questions about the Chiefs third pick in the draft. I'm slowly beginning to see the point so many of you have made about the importance of bookend tackles regardless of where the second bookend might be drafted.

I think top 3 for a right tackle is a little high but if there were an elite right tackle available I would be content with drafting him. The problem is, I only see career left tackles that are rated high enough to warrant a sniff from the Chiefs.

"You are what you are"...where have we heard that before?

Has he been watching his former team?

'I think this is dumb..." Coming from the media friendly Herm era, I'm already liking this attitude from Haley.

On the importance of Scott Pioli being on board with the Chiefs:

On his personal football aspirations:

It all comes back to Bill Parcells:

We've focused on Bill Parcells and his influence because of statements like this. Haley takes many of his lessons in football from Parcells. Likewise, Pioli and his mentor, Bill Belichick, have ties to Parcells.