Share All sharing options for: Michael Crabtree Out 10 Weeks with Injury; Needs Surgery 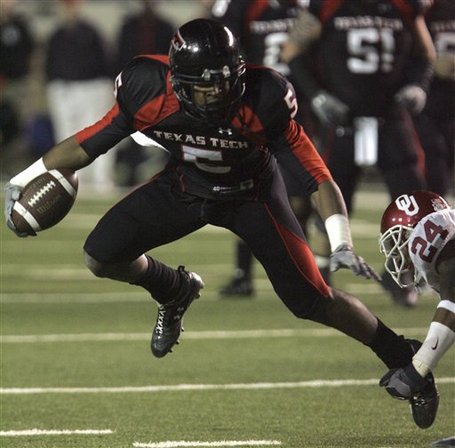 Though it's never a good time for a stress fracture in your foot, two months before the NFL Draft is a tough break for Michael Crabtree. Per Adam Schefter:

The injury and surgery is expected to sideline Crabtree for at least 10 weeks, jeopardizing his NFL pro day, which now is expected to be cancelled, and raising questions about when he will be healthy again. But doctors believe that with the precautions the All-American wide receiver is willing to take, Crabtree will be sufficiently recovered in time for training camp this summer.

According to Schefter, it is a slight stress fracture in his left foot that will require surgery to insert a screw.

10 weeks would put his availability somewhere around the date of the NFL Draft on April 25th.

He wasn't planning on running the 40 yard dash at the Combine so, while this definitely hurts his stock, we really weren't planning on seeing much from him at the Combine.  He has, however, canceled his pro day which may make a team like Seattle with the 4th pick in the draft think twice about him without getting a closer look.

Crabtree is an interesting prospect for the Chiefs at the third pick but I never really thought we would seriously consider him.  This injury, combined with reports that he's actually closer to 6'1" than 6'3", will definitely hurt his stock.

But will it be enough to push him to the bottom half of the top 10?

H/T to Lanier63, 3rd Coast Chief and Texas Chief in the FanPosts.

UPDATE: Per Schefter, Crabtree will put off surgery until after his March 26th pro day at Texas Tech. This means that he WILL run the 40 yard dash on that day because he's not feeling any pain in his foot.