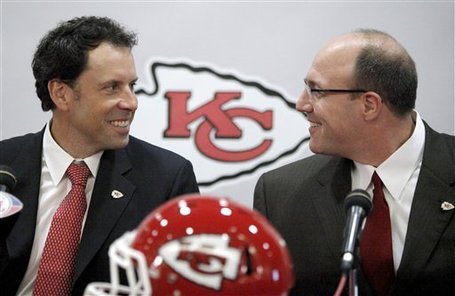 The Kansas City Chiefs coaching changes smells like change for change's sake. Many of the coaches that were released, many from the Herm Edwards/Carl Peterson era, didn't produce results.

Thus change was a necessity. But are the new coaches legitimate upgrades? Or is this change for change's sake?

Take a look at how each of the new hires fared in our poll.  Remember, these polls were thrown up less than 24 hours after the announcements were made so I think a lot of you were excited simply for change and not excited for the actual coaches and their resumes (if I'm wrong, let me know in the comments).

Each coach had a Haley/Pioli/Parcells connection, which is fine.  This is how coaches in the NFL are hired.  You mainly stick to your network of guys you know and determine if their skills that you're familiar with can translate to what you're trying to do.

The problem with the Carl Peterson network, or the good-old-boy network as it's so fondly been remembered as, is that Peterson was unable (or unwilling) to step in and take charge of his hires when it was necessary.

Do you think Scott Pioli and Todd Haley can decipher the difference between personal and professional relationships?