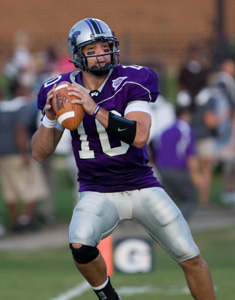 Continuing on with our coverage of the players the Chiefs talked to at the Senior Bowl we come to Nathan Brown, quarterback out of Central Arkansas. The 6'1", 215 pound I-AA senior absolutely torched the lesser defenses of the Southland Conference.

Around here we've discussed a lot about what makes a college quarterback a good pro quarterback. Football Outsiders has the theory that completion percentage and games started are the two most important and most translatable statistics from college to the pros.

Brown's college stats fit the Football Outsiders theory very well as he played for four years and completed over 64% of his passes in every season. Here are his complete college stats after his redshirt season in 2004.

As you can see, he started 45 games and ended with a career completion percentage of 67.4%. Compare that to the other three quarterbacks projected to go in the first round and you'll see he stacks up well.

Brown assumed starting duties midway through his freshman (redshirt) season. He went 8-1 down the stretch leading his team to the NCAA D-II FCS (Clarification on this here. Thanks treyuca) quarterfinals. After the season he was named the conference player of the year.

His sophomore season wasn't as successful from a statistical standpoint because he missed three games after breaking a bone in his throwing hand. Nonetheless, he went 6-2 as a starter and hit 64.9% of his passes.

His junior season is when he really began to break out. He was named first team all conference and the conference offensive player of the team. He raised his completion percentage to a shade under 68%.

Brown's senior year was outstanding. His completions and attempts are nearly identical to his junior year and he showed major improvement in his TD:INT ratio.

* I wrote the rest of this post for Primetime. He had some work stuff to take care of. -Chris

So you've seen Brown's stats and they're pretty good. But then you remind yourself that he was playing against a much lower level of competition than Division 1 players. That's been one of the consistent knocks on Brown and really any D-II player. Remember, the Chiefs were starting two D-II corner backs last year at one point so a non-D-I player doesn't have to be a throwaway or project pick.

With that D-II lens coloring your Nathan Brown thoughts, here are a list of his postives:

Those postives were summed up well by the man himself, in a July 2008 interview.

My arm strength. I can make any throw. It has to be my knowledge for the game. I gather a lot of knowledge and put it onto the field. I have leadership qualities that a QB has to have.

Of course, especially with a D-II player, we have legitimate reasons to be weary of Nathan Brown, just like the D-I schools were. Here are his few negatives:

Nathan Brown really does have a great college track record and very few flaws. The problem is, his few flaws are fatal when trying to transition to the NFL. Habitual, faulty throwing motions are difficult to get rid of and it's likely at the NFL level that Brown would not be afforded the amount of coaching necessary to correct this throwing problem.

Plus, and Brown can't help this, he's short. Combine short height with a three-quarter throwing motion and NFL defensive linemen are going to relish knocking down your passes.

Does Nathan Brown remind you any current NFL QBs yet?

Tony Romo. The guy is such a similar prospect to Tony Romo. D-II guy. Scrambler. Side arm type motion.

I've never been a big Romo fan so I can't say I'm excited about the comparison.

A lot of draftniks are using the phrase "mid to late round" to describe Brown's draft spot. I'm going to say he's like a 6th round pick in this year's draft. Brown is also consistently being ranked in the top 10 QBs by the draftniks.

Will he be a Chief?

Personally, I don't think Nathan Brown is anything more than a passing D-II fancy. Guys like this don't succeed in the NFL on a regular basis.