Where We Stand: The Kansas City Chiefs Offensive Line

Share All sharing options for: Where We Stand: The Kansas City Chiefs Offensive Line 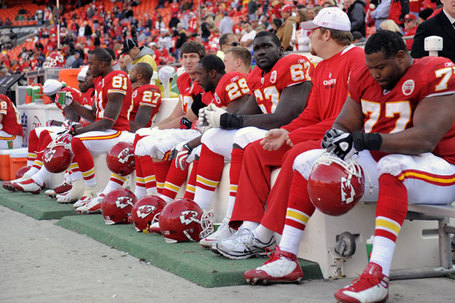 Somehow, after the lowest of the lows in 2007, the Kansas City Chiefs rushing offense actually produced some yards this past season. The team ended up ranked 16th in the league in rushing, after ending 2007 ranked dead last.

A big part of that success was the addition of fullback Mike Cox and Branden Albert on the left side of the line. Those two players in particular helped take the sorest spot on the team and turn it into a squad that was rarely mentioned on game day. And that's a good thing.

One important thing to point out in regards to the success of this year's offensive line is continuity. Brian Waters and Damion McIntosh started all 16 games. Rudy Niswanger and Branden Albert started 15 games. Good things happen when a unit can play that many games together.

Hopefully, 2009 brings even better things for the Chiefs offensive line. Let's take a look at where we stand with our offensive line heading into the 2009 off season.

Chiefs fans can finally breathe a sigh of relief that the most important position on the offensive line has been filled with a talented young player. Albert handled opposing defensive ends and linebackers with relative ease for a rookie. His greenness showed up now and again but most would agree that he is the definition of an anchor of an offensive line.

Impact in 2009: Starting left tackle for the foreseeable future.

Even though McIntosh didn't play as poorly as his 2007 season, I still have to immediately knock a right tackle for giving up 7 sacks. Opposing teams knew where our line's weak spot was and that was Damion McIntosh on the right side of the line. McIntosh, like the rest of the line, seems to have benefited from continuous play with Albert, Niswanger, Waters and the Smith/Jones duo.

Impact in 2009: Probably the starting right tackle. The Chiefs have nobody up and coming who is worthy of overtaking McIntosh at right tackle.

In nine seasons with the Chiefs, Brian Waters has started every game six times. Waters heads to the Pro Bowl for the fourth time in his career. Never flashy and never screws anything up.

Impact in 2009: Waters will be the Chiefs starting left guard until he physically can't do it anymore. Waters has shown no signs of slowing down at age 31.

Despite being labeled a guard, Wade Smith is really more of a utility player. He plays both guard sides and center if needed. He's an average but essential utility man. Others could play his role on the Chiefs but there isn't a reason to change now.

Impact in 2009: Will continue to rotate to areas of need. No real chance of becoming a starter.

Jones filled in a lot more at right guard in his second season with the Chiefs. He missed a few games towards the end of the season with an injury. He split time with Wade Smith at this position, making him expendable.

Impact in 2009: A 2nd or even a 3rd round pick on a guard eliminates Jones' starting gig. Wade Smith would get the nod over Jones if it came down to it, because of Smith's utility.

Taylor still has the look and feel of a rookie out there. Taylor committed four false starts in very limited action in 2008. The 6th round pick is playing like a 6th round pick.

Impact in 2009: It's getting close to put up or shut up time for Herb Taylor if he wants to play any significant portion of time in his career. The Chiefs could easily replace him in the draft or free agency if they don't see him progressing.

I'll be the first to admit I'm no expert in judging offensive linemen but it seems like Rudy Niswanger leaves a bit to be desired for a center. The fact that he started in 15 games for the Chiefs shows us how much the coaching staff liked him. But this is a new staff that won't necessarily see things the same way Herm did.

Impact in 2009: No lock to be the starting center next year, Niswanger may end up the stater by default. It really depends how hard the Chiefs want to pursue a center in free agency or the draft.

Beyond these guys, the pickens are pretty slim. Barry Richardson, Tavares Washington and Andrew Carnahan round out the offensive linemen who didn't play. They're suspect roster members at best right now.