If Crabtree is Anything Like Fitzgerald, Chiefs Should Take Him with the 3rd Pick

Share All sharing options for: If Crabtree is Anything Like Fitzgerald, Chiefs Should Take Him with the 3rd Pick 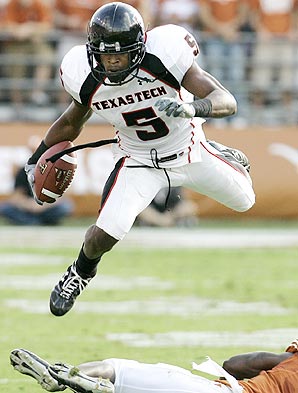 Yes, many receivers are devalued in the first round of the NFL draft because an outstanding year produces 100 receptions or just 6.25 touches per game.  Compare that with a running back who might touch the ball over 300 times in a season.  But Larry Fitzgerald's performance not only in the 2008-2009 regular season, but also in the playoffs (statistics above) demonstrates the value of an elite wide receiver in the NFL.

Fitzgerald was a beast coming out of the University of Pittsburgh.  He had NFL size and the college statistics to back it up.  Taking a look at Fitzgerald's size and performance in the college ranks brings us back to the Michael Crabtree question.

I have not been an advocate of selecting Crabtree with the 3rd overall pick.  Not enough value. Championships are won in the trenches. Plenty of other needs.

After watching the impact a player like Fitzgerald has on the Cardinals, why wouldn't the Chiefs seriously consider Crabtree with the 3rd overall pick?

Both players were primary starters for 2 seasons in college and both were the consensus #1 at wide receiver entering the draft.

The thing with Fitzgerald, and a guy like Crabtree, is that you can play perfect defense and still not get it right.  As Fitzgerald has demonstrated, he's just bigger and stronger than the opposition.  Sometimes, there's nothing the opponent can do about it.

NBC's pregame show had a segment dissecting Fitzgerald's impact with Rod Woodson playing as a DB and Cris Collinsworth as a WR.  They dissected a few plays and how the Steelers would guard Fitzgerald.  At one point, Collinsworth asked what happens when the ball goes up in the air and Fitzgerald is just bigger and stronger than the defender and can catch the ball at its highest point.  Woodson didn't have an answer for him.

The point is, there are plenty of indications that Crabtree is this type of player (although nothing is guaranteed).  Bigger. Stronger. Better.  Why not take the risk that Crabtree will be the next Fitzgerald?