Chiefs Offseason Continues with Day Two of the NFL Combine

Share All sharing options for: Chiefs Offseason Continues with Day Two of the NFL Combine 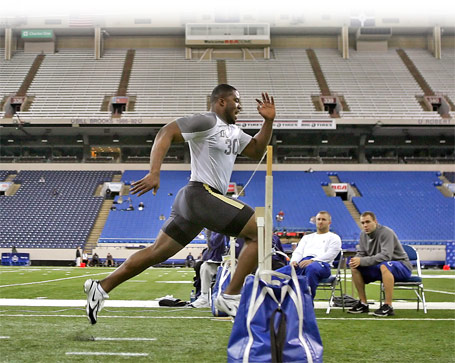 The second group is arriving at the NFL Combine at Lucas Oil Stadium in Indianapolis, home of the Colts. This group includes quarterbacks, wide receivers and running backs.

Here's a quick schedule for this group:

Here is the NFL's Combine Blog and the Combine website.

Click over to see the players headed there today.

I've been thinking about what teams can actually get from the Combine. I hope the Chiefs don't completely base their draft decisions on what they see at the Combine but maybe affirm what they already knew.

There are a few things that will be accomplished at the Combine.

First, teams will complete a thorough medical evaluation of players they might be interested in. This is very important for players with an injury history to prove that they're 100%.

Second, the interviews give teams an idea of what type of person the player is. When you're thinking about investing millions of dollars into someone, this is crucial. Players are coached by their agents (and others) to ace these interviews but sometimes that coaching isn't enough. And sometimes they've been coached so well that teams have to be able to dig deeper to find out what type of person the player is.

One NFL GM said the interviews can create some insight, but not always.

"It's really a first impression, and you can't read too much into it. Some players have been prepared more than others, and some players just don't interview exceptionally well. The [player] interview process can be revealing at times, but we weigh each part of the process accordingly."

Third, teams will be looking at athleticism (obviously). Some players (Vernon Davis) will become workout wonders and shoot their way up draft boards. Other GMs will look at two players who are graded closely and base part of their decision on the most athletic one.

The Jaguars GM Gene Smith agrees with this type of decision making.

"Sometimes, you have two guys graded very close, and the athleticism ranking can be the tiebreaker, per se. If all things are equal, we'll take the guy with more ascending athletic ability to develop."

So, I don't think any teams are basing their total decisions off this combine, but it's a good start to making draft decisions.