Why Did the Chiefs Retain Defensive Line Coach Tim Krumrie?

Share All sharing options for: Why Did the Chiefs Retain Defensive Line Coach Tim Krumrie? 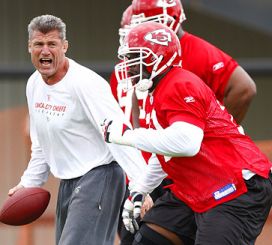 In case you'd forgotten, the 2008 Chiefs defensive line was quite literally one of the worst defensive units in NFL history. (Sweet Jesus how many times am I going to have to type that?)

10 sacks. Worst in NFL history. (I find it interesting that nobody seems to mention this about the record: The previous NFL worst for sacks in a season was 11 by the 1982 Baltimore Colts, who only played nine games that season. The media generally reports only the stats of full, 16 game seasons. They missed an even more shocking stat on this one by doing that.)

Hmm. Now we know that Scott Pioli and Todd Haley are intelligent people. Why would they bring the man responsible for such a fiasco back?

Haley's move to retain Krumrie tells me a couple of things.

First, that he likes what he's seen in terms of Krumrie's coaching prowess. Obviously. He saw a coach who was seemingly completely hampered by the low level of talent he was forced to work with. I could imagine Scott Pioli and Todd Haley evaluating the defensive line, looking at each other, and thinking that no one could succeed with this group of guys.

Is it possible our defense line is so poor that they won't even respond to coaching? I guess it's possible. Maybe Todd Haley thinks so.

Second, keeping Krumie as the coach despite last year's performance tells me that the defensive line problems are likely entirely on the talent/personnel side. Which means that we're probably looking at as many replacements on the d-line as possible. If your team had one of the worst rushing defenses of all time and you kept the line coach, you'd be expected to pretty much clean house on the defensive line, right*?

*To be fair, linebackers and the secondary do play a role in limiting opponent's rushing but the defensive line is the most responsible.

Does cleaning house include Glenn Dorsey?

For salary reasons especially, it would not include him. His signing bonus would be accelerated against the salary cap if we let him go. Dorsey will get a pass for at least two more years even if he is indeed not as good as advertised. But I think we're judging him far too soon. Remember, Glenn Dorsey ranked 1st in tackles for rookie defensive linemen. It's also possible that the coaching staff would want to retain only Dorsey and clean the rest of the house.

It's not hard to imagine getting rid of our other defensive linemen. DE Tamba Hali is turning out to be another blown first day pick. Turk McBride is at best an average defensive end and has half a season lost due to injury in just two seasons played. Ron Edwards and Tank Tyler haven't given us anything to indicate they'll progress beyond their current talent. Not a single player on our line would ever require a double team.

Getting back to Krumrie's coaching ability, I just remembered one of Jason Whitlock's articles right before the final game of the 2008 season that mentioned Glenn Dorsey. Whitlock saw Dorsey in the locker room and was shocked by how small he was. The reporter then chastised the Chiefs coaches in the newspaper for how they were using the #5 pick. Jason Whitlock seems to think it's insane the position the Chiefs are playing Dorsey at- straight up over an offensive guard.

This is the single-worst, defensive-strategy decision I’ve seen in 15 years of covering the NFL. Honestly, defensive coordinator Gunther Cunningham and defensive-line coach Tim Krumrie should be fired today and not allowed to travel to Cincinnati for the season finale.

We'll see if a position switch is in store for Glenn Dorsey. His improper use is quite the knock on Krumrie but Haley apparently was willing to over look it.

Like with most problems in the NFL, it's probably some combination of coaching and low talent level that created last year's mess. But Todd Haley seems to think that Tim Krumrie has what it takes to eventually be successful coaching a defensive line. If he didn't think so, Tim Krumrie wouldn't still be a Kansas City Chief.

Todd Haley retaining Tim Krumrie tells me that a lot of changes are in store for the defensive line, despite the normal logic that says keeping a coach promotes continuity.

There's definitely wiggle room in my arguments. Let's hear what you have to say about the Chiefs keeping Tim Krumrie.