Could Chiefs' Chan Gailey Head Back to the College Ranks?

Share All sharing options for: Could Chiefs' Chan Gailey Head Back to the College Ranks?

Sorry for the short downtime we just experienced.  As the regulars can attest, that rarely happens.  -Primetime 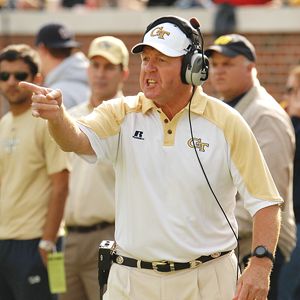 The rumor making the rounds is that Chan Gailey could be a candidate for the offensive coordinator opening at the University of Pittsburgh.

Former offensive coordinator Matt Cavanugh bolted to the NFL to take the quarterbacks coach job with the New York Jets.

According to Rivals, Gailey might be a target for the Pitt job.

Gailey, if you'll recall, spent 6 years as the head coach for the Georgia Tech Bulldogs. Tech fired Gailey following the 2007 season at which point he promptly accepted the Chiefs offensive coordinator job.

Save a 6 year stint with the Denver Broncos in the 80s, Gailey spent his pre-Pittsburgh Steelers coaching career in the college ranks so I can absolutely envision him heading back to college. In addition to that, he's shown a willingness to jump back and forth between the NFL and the college ranks so, while we can debate the validity of the Rivals report, we can't deny that a move back to the NCAA level would be in line with what Gailey has done in his past coaching career.

I've always been in the camp that Pioli gets a virtual pass his first season with the Chiefs because he's been so successful in the past. But the 'Slow Po' nickname is starting to gain some steam around here because nearly every NFL team has its coordinators set and the Chiefs have yet to confirm that (A) Gailey is their guy on offense or (B) Gary Gibbs is the guy on defense.

Judging by his past record, Gailey would continue to make an excellent offensive coordinator for the Chiefs. But with the Chiefs perceived to be dragging their feet on his future with the organization, he will have to make a decision that's best for him.

With most staffs around the league set, Gailey's decision may have to come sooner rather than later.