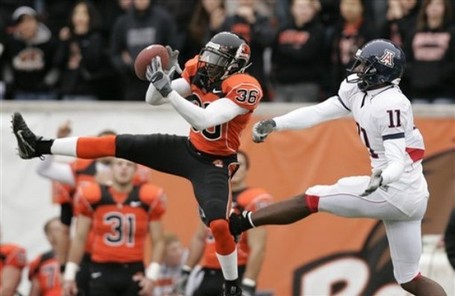 Following up on the players the Kansas City Chiefs spoke with at the Senior Bowl, today we're taking a look at Oregon St. CB Keenan Lewis.

A 6'1", 200 pound senior, Lewis was honorable mention All-Pac-10 in 2008 with three interceptions and eight pass breakups. Lewis was a 45-game starter with the Beavers in the pass heavy Pac-10 conference, meaning he's got quite a bit of experience against NFL caliber quarterbacks and offenses.

One of my favorite draft sites is NFL Draft Scout ($$$) and this is what they had to say about Lewis' positives:

Rare height for the position. ... Aggressive at the line of scrimmage. ... At his best in press coverage where he can get his long arms on the receiver and disrupt the timing of the passing game. ... Good foot quickness to turn and run with the receiver. ... Plants, drives and closes quickly. ... Gets his hands on lot of passes. ... Has the experience and intelligence to operate well in zone coverage. ... Enjoyed a solid week of practice at the Senior Bowl.

Lewis runs a 4.5 40-yard dash which means he's got a lot of speed. He's also been described as having "safety size" at over 6 feet tall. He was the biggest cornerback at the Senior Bowl.

Of course, there are negatives to his play as well. More from NFL Draft Scout:

Questionable deep speed. ... Lacks the soft hands for the interception. ... Misjudges passes and allows too many to get into his chest. ... Generally a reliable open-field tackler, but likes to duck his head and swipe, leading to some missed tackles. ... Can get a bit grabby downfield, which will lead to pass interference calls at the next level. ... Willing in run support, but was protected by a physical and experienced front seven, and prefers to stand around the pile, rather than throw his body into it.

I don't care about lacking soft hands. That's why he's a corner and not a wide receiver. I don't really see any negatives that can't be fixed by good coaching in the NFL. He may need to bulk up to play safety though, which is again something that can be easily helped.

The consensus around the interwebs is that Keenan Lewis is a 3rd to 4th round pick. He's thought to be anywhere from the 10th to the 15th best cornerback in this year's draft.

Interestingly enough, NFL Draft Scout compares Lewis to the Chiefs' 2006 5th round pick Miami cornerback Marcus Maxey, who is no longer in football. That description is of the potential of each in the pros so don't assume that because Maxey failed that Lewis will too.

With his size, a lot of draft sites are projecting Keenan Lewis as a safety at the next level. If he bulks up to a Bernard Pollard like 220 pounds, he's going to be a big player.

Lewis played man-to-man schemes at Oregon St., which is something I love to see. 45 starts in college in an aggressive man scheme really intrigues me about his potential in the NFL. I think it's much easier to switch from a man scheme to a zone type scheme than it is to go the other way. Being a good man-to-man corner means that player has athleticism, speed, solid instincts and a good chance to succeed in a number of NFL schemes.

The Chiefs are pretty much set at cornerback after last year's draft but another safety wouldn't be a bad idea. Bernard Pollard and Jarrad Page are playing pretty well but that doesn't mean the Chiefs should pass up another good secondary player if Lewis is available.

The secondary isn't a huge area of need and using a 3rd or 4th round pick on that area may not be the best idea. With that said, my research indicates that Lewis is probably going to be a good but not great player in the NFL and if he falls to later rounds, the Chiefs would be wise to draft him.