What can the Chiefs Expect to Pay the 3rd Pick in the NFL Draft?

Share All sharing options for: What can the Chiefs Expect to Pay the 3rd Pick in the NFL Draft? 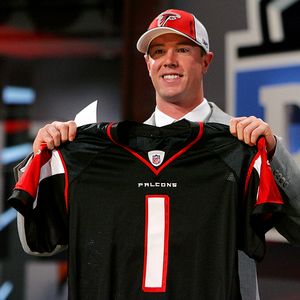 The 3rd pick in the draft in 2008, Matt Ryan's contract will likely cause the Chiefs problems.

The major downside to picking so high in the NFL draft is the money that's involved.  The draft value trade chart you see floating around is largely considered outdated because it doesn't taken into account the increasing money paid to the top draft picks.

We'll use the tables below to determine approximately how much the Kansas City Chiefs can expect to pay the 3rd pick in the NFL draft this year.

How important is guaranteed money? Look at the variation of the total value of the contract in the first three picks.  Most of these players won't see this contract lived out.  They'll either be released/traded or extended/restructured by the time the deal runs out which is why guaranteed money is so important.

The top 3 picks in the draft are very valuable.  Take a look at the drop off from the 3rd to the 4th pick.  2006's 4th pick was nearly $8 million less in guaranteed money and 2007 was nearly $5 million less. Of course some of that depends on the length of the contract but the gap between the two picks may make it difficult in establishing a floor for the contract's guaranteed money.

There are two important numbers to focus on in these charts - length of the contract and guaranteed money.

The trend we noticed last year was players giving in on the total money of the contract to shorten the length.  This is very, very important because the goal of ANY player is to get to free agency as quickly as possible.  These are certainly HUGE contracts but the second contract is where you really set yourself up.

For the Chiefs, I would prefer a 6 year contract, the maximum allowed, if we are picking a lineman.  Offensive and defensive linemen have a lower bust-rate than quarterback and their failure doesn't necessarily devastate the future of the franchise like quarterback does.

If we're selecting a quarterback, I think I would prefer a 5 year contract...just in case. If a high first round quarterback pans out, then his second contract will be massive whether his rookie deal was 5 or 6 years.  Examples include Ben Roethlisberger (2004 draft) who signed an 8 year, $101 million contract over a year ago and Eli Manning (2004 draft) and Phillip Rivers (2004 draft) who will both likely cash in on $100 million extensions this offseason.

But if that first round quarterback doesn't pan out then one less year to get him out of town will be essential in re-re-building.

The agent for the player the Chiefs select might be pushing for a 5 year contract as opposed to 6.  This is because agents only get paid when the player signs a new contract.  So, like the player, the agent wants to get to the second contract as quickly as possible as well.

When players switch agents it's usually a good sign that some contract negotiations are coming because said agent, like anyone else, wants to get paid.

This is what these contracts really boil down to. With any player, there's no guarantee the team will get the production they paid for. If the player doesn't produce in his rookie deal, then he's not going to (necessarily) strike gold in his second contract.

That said, it's the job of the agent to secure as much guaranteed money for the player.  Injury and a lack of production are a couple of the reasons that the player won't get another big contract.

Since all NFL contracts aren't fully guaranteed, coming at the player with the correct amount of guaranteed money is the golden ticket in contract negotiations.

Matt Ryan was the 3rd pick in the draft last year so his contract will likely be the floor for the Chiefs negotiations.

Since Matt Ryan's guaranteed money was such a drastic leap from the previous year, the Chiefs will likely have quite the negotiation session.  Agents simply will not accept less guaranteed money, on average, than the previous year at the same slot.  Taking a less than market value deal is damaging to the agent's reputation and hinders their ability to sign clients in the future.

What can the Chiefs expect to pay?

We don't know yet whether the Chiefs 3rd pick will acquire a 5 or 6 year contract so let's base this off the important number - guaranteed money per year average.

Using Matt Ryan's contract as the floor and my guess of $6 million guaranteed per year as the ceiling, this is what the Chiefs could be looking at paying in total guaranteed money this year.