Chiefs Coaches Dropping Like Flies But One Question Remains 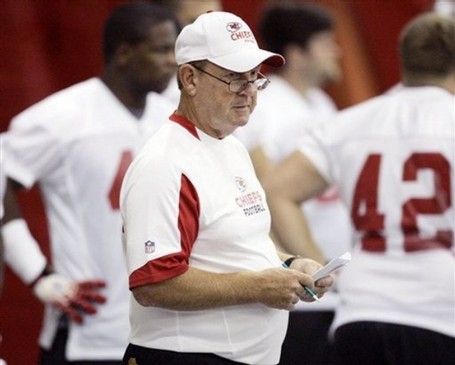 The flies that have dropped apparently do not include offensive coordinator Chan Gailey at this point.  With the Kansas City Chiefs apparently hiring former New Orleans defensive coordinator Gary Gibbs as either the coordinator or linebackers coach, and of course there still being no official statement from the Chiefs, it got me thinking.

Is this any indication the Chiefs are going to stick with the ArrowSpread next season?

Of course we aren't likely to get any definitive word from the Chiefs (until several days after the reports break) but it got me thinking that the coaches who had arguably the most to do with the Chiefs second half "resurgence" are still employed. I would venture to say that this means that new coach Todd Haley, along with GM Scott Pioli, is giving serious consideration to the spread offense.

If this were true (big if), then I think we could count out acquiring a quarterback via the trade or free agency market. Tyler Thigpen demonstrated he can competently run that type of offense so it wouldn't make any sense to bring in a veteran quarterback to start right away.

Adam Teicher at the Kansas City Star says at least one of the remaining coaches appears to be returning.

While one source indicated that doesn’t mean any or all of the four will be retained once Haley’s staff is set, another said Bicknell has been told be will be invited to stay, perhaps as the tight ends coach.

Maybe continuity (thanks, Herm) is the key on the offensive line.

According to Teicher, Gailey's future appears to be tied to the play calling issue.

Gailey wouldn’t talk about it, but people familiar with him say he’s not thrilled with the prospect of coaching for Haley if indeed the head coach wants to call the plays.

Can't blame him at this point in his career.

It's the beginning of another week and the question still remains: Will Chan Gailey be a Chiefs coach in 2009?