What's the Point of the Chiefs Secrecy Under the Pioli Regime?

Share All sharing options for: What's the Point of the Chiefs Secrecy Under the Pioli Regime? 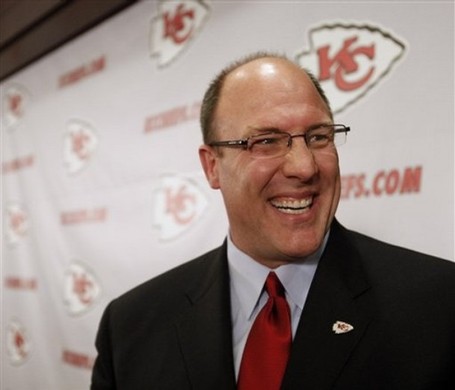 I'm laughing because the media won't get a word out of me for the next 10 years.

When the Kansas City Chiefs hired Scott Pioli I knew our "job" as bloggers would become more difficult. The information that seemingly flowed freely during the Carl Peterson regime would certainly stop. Pioli and New England Patriots head coach Bill Belichick were notorious for telling the media as little as possible, if anything at all.

Since his hiring, Pioli and team owner Clark Hunt conducted what many have called the most secretive head coaching search in the NFL.

No comment. I don't know anything. I'm not at liberty to say.

All these are becoming the mantra of the Pioli regime which, if it worked in New England, is fine by me. As a fan first and blogger second, I want this team to win. But I gotta admit, the Communist China act from the big three, Pioli, Hunt and new head coach Todd Haley, is frustrating for the blogging gig.

But what's the point of all the secrecy? Is it really a competitive advantage? Are all the security steps worth it?

These are the questions Kent Babb, who has quickly become one of our favorite sports writers, is asking in his latest column for the Kansas City Star.

It’s not the CIA or the line to claim a night in the Lincoln Bedroom. This is the sentry point to enter Chiefs headquarters, and the guard isn’t the only gatekeeper these days. There are locked doors and secret codes, off-limits hallways and parts of the new facility that even the regulars can’t visit without a team-employed escort. The third-floor executive offices? Forget that. Even a trip to the old restroom, the two-seater down the hall past community relations, will get you a talking-to after an executive complained that there was unauthorized activity in the southeast corridor.

As bloggers (without press passes), we rely heavily on Babb and others at the Star. But, if the past month is any indication, the Pioli regime is twisting their focus from facts to speculation.

As frustrating as it is for someone like me who's constantly clamoring for information about the Chiefs, I love the secrecy in the Pioli regime.

One of my favorite stories of the Patriots' secrecy during the Pioli/Belichick era involves a man named Ernie Adams who was apparently Belichick's right hand man in New England (If you don't know who he is, click here for a great article on him in ESPN the Magazine). Apparently he's an X's and O's genius but Belichick and Pioli are one of the few people who actually know what he does.

They were so secretive that when Belichick and Adams were in Cleveland together, owner Art Modell offered $10,000 to anyone who could tell him what Adams does.

Pioli was asked about Adams' business with the team and slightly smiling said, "Some of that information is top secret."

Babb posed a question to his audience that I want to blatantly steal borrow here and gauge your thoughts on.