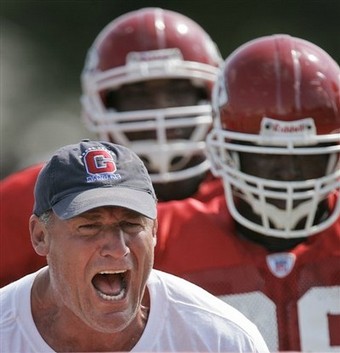 The louder you scream, the easier it is to get your point across.

Last weekend Chris posted some information on the coaches that still had a job under new head coach Todd Haley.  Since there's been some turnover I've updated the table on the coaching staff below.

Frankly, I don't see a reason to keep any of the coaches now remaining. We've pretty much cleared house already why not complete the process?

Defensive line coach Tim Krumrie wasn't able to get much production out of a line full of first day picks. Chiefs fans have been begging management to send him to the unemployment line.

The offensive line performed horrendously for the first half of the season when the Chiefs were playing in a more traditional offense.  The line's ability to protect the quarterback improved with the onset of the ArrowSpread offense. But that untraditional offense was only necessary because they couldn't protect the quarterback in the first place.

Though it's difficult to pin any blame on our Strength and Conditioning coaches for the amount of injuries, I don't see any reason to keep them. If you can't find any compelling reasons to keep them, then ship them out because as far as I'm concerned they're part of the old guard. New GM, new coach, new blood.

One thing I worry about when hiring someone who has never been a head coach before is the lack of contacts he may not have around the league.  Like we were discussing with the Parcells/Pioli/Haley/Gibbs connection, the league isn't necessarily what you know but who you know.

Haley, as a first time head coach, doesn't have the network that retread coaches might have.

The Chiefs season has been over for 7 weeks, the NFL combine is rapidly approaching and new coach Todd Haley still has nearly an entire defensive staff and portions of an offensive staff to fill.

Maybe I should have believed Scott Pioli the day he was hired when he said this thing would be "methodical".