Share All sharing options for: Chiefs to Hire Gary Gibbs as Defensive Coordinator or LBs Coach 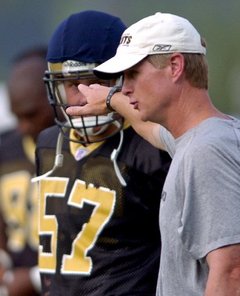 UPDATE: Per Adam Schefter of the NFL Network, a deal between the Chiefs and Gibbs is all but done.

The rumor circulating through the league is that the Kansas City Chiefs are looking at Gary Gibbs as a possible defensive coordinator and/or linebackers coach replacement for Gunther Cunningham.

Most recently Gibbs spent four years with the New Orleans Saints as defensive coordinator. He spent the first 20 years of his coaching career at the University of Oklahoma in positions ranging from linebackers coach to head coach following the departure of Barry Switzer in 1989.

Gibbs didn't have much success as the Saints defensive coordinator and according to FireGaryGibbs.com, the fans were glad to see him fired on January 7th earlier this year.

Gibbs arrived in New Orleans and was met with immediate success leading the Saints to the 13th ranked defense, up from the 28th ranked unit the year before.

His first year success prompted several teams, including the Dallas Cowboys and San Diego Chargers, to interview him for their vacant head coaching positions.

However, two short years and the 25th and 26th ranked defenses later, Gibbs is on the job market.

One note from the Times-Picayune might be a bit disturbing to Chiefs fans who have been clamoring for someone, anyone to effectively coach the defensive line. Upon his departure Mike Triplett and Teddy Kider wrote this on Gibbs:

Gibbs' defense allowed 339.5 yards per game in 2008, struggling to cope with injuries and constantly giving up big plays in the secondary. The Saints also never seemed to find the production they were looking for from their defensive line, which has two highly paid defensive ends in Will Smith and Charles Grant but struggled in pressuring opposing quarterbacks.

What's the connection to Todd Haley?

Since the NFL is largely a 'who do you know' not 'what do you know' league, what's the connection to new Chiefs head coach Todd Haley?

Todd Haley was the Cowboys wide receivers coach in 2005 when Gibbs was the linebackers coach the same year. Both men, of course, worked under Bill Parcells.

So, to get this straight.

There's your connection. Though Gibbs' defenses the last two years have ranked in the bottom third of the NFL, it's somewhat reassuring that his first NFL gig was under the tutelage of Parcells.