Share All sharing options for: Expert Says Chiefs Have Ten Options with 3rd Pick in the Draft 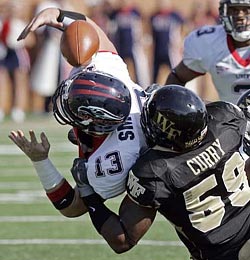 Adam Teicher spoke with Mike Mayock a couple days ago regarding the Kansas City Chiefs' options in April's draft. Since we didn't touch on this very much yesterday, I thought I'd gauge everyone's thoughts on what Mayock has to say about the Chiefs and their plans with the 3rd pick.

Per the NFL Network draftnik, the Chiefs should be evaluating ten players and then ranking them 1-3 to assure they get the guy they want.

Here's Mayock's list, in no particular order, divided up into offense and defense.

There are a few of those players I definitely don't see the Chiefs doing anything other than taking a quick look at it including Jeremy Maclin, Knowshon Moreno and Chris 'Beanie' Wells.

In my estimation, the Chiefs have no business selecting a running back in the first round. Heck, they shouldn't even be looking that way on the first day.  Running backs are a dime a dozen and have short careers.

Teicher had this to say regarding the possibility of picking one of the tackles:

The Chiefs drafted Branden Albert in the first round last year, and he looks like their left tackle for several seasons. That’s why the Chiefs probably wouldn’t seriously consider Monroe or Smith, but it’s not impossible because they could use an upgrade on the right side of their line.

I think there are more than a few of us that would disagree with that statement.  Take good linemen wherever you can get them.

Unfortunately for one of the league's worst defenses last year and the worst pass rush in NFL history, there's only two defensive players on there, both of which I think are in play for the Chiefs.

After eliminating the three definite No Thank You's, I'd rank the following like this:

Given Mayock's list, how would you rank these players? Remember, we're playing GM here so if you're drafting best player available or a combination of BPA and need, say so.