Over the next few weeks for the sake of conversation I will be going over current coaches that I believe could serve as coordinators or position coaches for us, but this is all contingent on what the response to this post is so please if you like it drop a comment and I'll keep em' coming. Today I came across a very intriguing defensive coordinator prospect. Without further adieu I present Mike Waufle 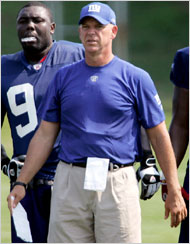 I did a quick search on this site to make sure I wasn't pulling a "guppy" here and came up with nothing so I think I'm pretty safe. With the disclaimer stated here we go.

Mike Waufle has been the driving force behind the most important aspect of the Giants defense, in essence the Giants super bowl team. The defensive line. He was passed up in favor of Bill Sheridan, the linebackers coach, for the Giants once vacant defensive coordinator job. Waufle has groomed a mess of dominant defensive linemen such as Fred Robbins, Osi Umenyiora, and Michael Strahan, he's also brought along promising young defensive linemen such as Justin Tuck, Barry Coefield, and Jay Alford Waufle also navigated  Mathias Kiwanuka's transition from linebacker to DE. Obviously looking at the list of his successes Waufle knows how to create depth on a defensive line, a lot of credit goes to Spagnoulo for his blitz packages, and I respect that but I trust that Mike Waufle has got some defensive genius of his own given that he's been coaching for thirty years.

Just in case you still think Waufle is a product of Spagnoulo's defensive genius here's some more convincing for you. Prior to taking the job in New York Waufle led our division rival Oakland Raiders' defensive line in 1998, 1999, 2000, 2001, 2002, and 2003  with the exception of the dismal 2003 campaign that wasn't exactly a stellar follow up to their super bowl run, the Raiders maintained solid 40+ sack campaigns every year with Waufle leading the defensive linemen. Then again Bill Callahan was their head coach in 2003 and produced a four win season for a suddenly declining franchise, and was soon fired, thus began the Oakland head coach merry go round.

Amazingly this isn't where his talents end. He's had a hand in the drafting and developing of the Giants defensive line, not by chance but by pure skill. He was a talent scout/ defensive line coach at the University of California before he entered the NFL. During his experience with UC he developed talented linemen at the college level, in 1996 two of his D-linemen; Duane Clemons and Regan Upshaw, were both drafted in the first round. Both, eventually panned out as busts and are out of the league. But this only speaks a louder testament to Waufle's coaching ability. They were excellent lineman in college (obviously) under Waufle but once they left his guidance suddenly things stopped going the way they used to.

Waufle would be a nice fit for us right now because in every situation he's ever been in he was a part of a 4-3 scheme. We ONLY have the personnel for a 4-3 so it makes sense. Imagine what this guy could do with Hali, Dorsey, Tyler, McBride, and Babin! I think they are all underachieving and Waufle may be the guy to unlock the potential in our D-Line. Having Wauffle on board may ultimately mean we won't have to spend early draft picks on defensive linemen just yet, giving us a chance to spend these picks on our woeful offensive line and Linebacking core.

Tell me what you guys think. As I've said the continuity of these posts lies completely on whether or not I get responses to them so if you want me to keep em' coming, even if all you say is "nice"or "+1" It'll be enough. Thanks for reading!