As the draft nears and talk heats up on AP about who we should draft, we'll be delving into tons of past draft recaps, bust rates, etc. 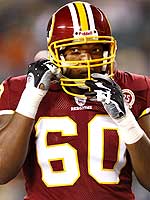 Drafted by the Washington Redskskins after the team had just chosen LaVar Arrington with the #2 overall pick, Chris Samuels has been an ideal left tackle. He's been to the Pro Bowl 6 times and only missed a handful of games due to injury over the last nine years.

Both Samuels and '09 tackle prospect Andre Smith played at Alabama and both won the Outland Trophy for the country's best college offensive lineman. 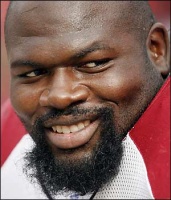 Davis has been another solid contributor as a high draft pick on the offensive line. Drafted by Arizona, Davis played guard for three years before moving to left tackle in 2004. What makes Davis a very dependable lineman is the fact that he's only missed five games in eight years.

Davis was signed by the Cowboys in 2007, where he's been a Pro Bowl guard for the last two years. 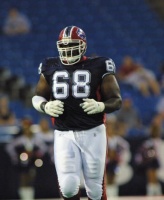 And with Williams, we have our first big offensive lineman bust of the decade. The Bills drafted Williams hoping he'd been their right tackle for the next ten years. Instead, the Bills got a below average run blocker and a terrible pass blocker.

Williams was moved to guard rather quickly but was undependable due to injuries. Williams was cut by the Bills in 2005; signed by the Jaguars in 2006; and placed on injured reserve before the '06 season even started. He is currently out of football. 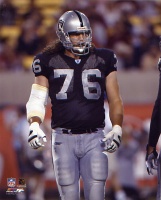 Those crazy Raiders. How can anyone succeed over there?I'll let Wikipedia tell Gallery's bust story, because it's just so succinct and brutal.

In 2004, he started 15 games at right tackle and gave up 3 Sacks. In 2005, he started all 16 games at right tackle and gave up 3.5 Sacks. The Raiders moved him to left tackle at the beginning of the 2006 preseason. In the Raiders' first game of the 2006 regular season, Gallery was part of an offensive line that gave up nine sacks (at least 3 charged to him) to the San Diego Chargers. He played 10 games on the season, and gave up 10.5 Sacks on the season, placing him 4th in most sacks given up, despite missing 6 games. In 2007, Oakland coaches moved Gallery to left guard.

There are a lot of caveats when judging talent on the Raiders but it's clear Gallery hasn't lived up to his potential. Hopefully for him (or not for the Chiefs sake) his move to left guard improves his play.

Ferguson is the one draft pick on here that I'm hesitant to call a bust or a success. He's started every game since he's been in the NFL, which is a huge plus in my opinion. He hasn't made it to a Pro Bowl yet which is a big award for a position that is tough to quantify.

This would be a good discussion- Is Ferguson a bust or not? 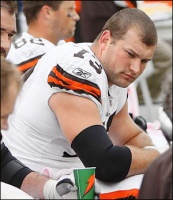 The two tackles taken in this top five of '07 appear like they will turn out to be excellent players. Two years is a short time to judge any draft pick but I think it's fair to say that Thomas and Brown are going to be above average offensive linemen.

We'll withhold full judgement on these guys until after next year. 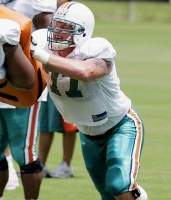 The number one overall pick in '08, Jake Long started all sixteen games for the resurgent Dolphins and only allowed 2.5 sacks. For a rookie at a position that is often matched up against the opposing defense's best player, Jake Long did an excellent job in 2008 and every indication is that he will be a fantastic left tackle.

This list tells us that if there is a top offensive line prospect, odds are that the player won't be a total bust and will contribute for a long time. Of course, like with any position, you have your land mines that are impossible to avoid.

How comfortable are you drafting an offensive tackle with the #3 pick?