Top Defensive Coordinator Candidate Given Permission to Interview with Cardinals

Share All sharing options for: Top Defensive Coordinator Candidate Given Permission to Interview with Cardinals 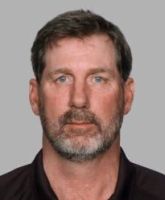 Word comes from the Arizona Cardinals official site that the team has asked for and received permission to speak with Pittsburgh Steelers linebacker coach Keith Butler about the vacant defensive coordinator position. If you'll remember, the Cards terminated the contract of Clancy Pendergast last week.

Chris covered Butler last week in a post trying to identify possible defensive coordinator candidates.  Here's what he had to say about Butler for a quick refresher:

Butler has been the Steelers linebackers coach for the last six years. If you've been paying attention to football at all during that time, you know that Keith Butler has been doing a heck of a job. Just looking at the current roster, the Steelers have two Pro Bowl linebackers in James Farrior and James Harrison. Harrison, who returned an interception for a touchdown to complete the longest defensive play in Super Bowl history, was also the 2008 defensive player of the year.

In 2005, ’s linebackers helped the Steelers lead the AFC and rank fourth in the NFL in total defense. The sack combo of Joey Porter and Clark Haggans produced 19.5 sacks between them. That's another fantastic job by Butler coaching his linebackers.

Butler has been the hot name in prospective defensive coordinator circles. Since he's currently the linebackers coach it would be a promotion for him.

A quick peek at a couple of key statistics for the Steelers defense during Butler's tenure shows just how solid he's been with the linebackers, the team's biggest strength. Here is how the Steelers defense ranked in comparison to the rest of the league in sacks and points given up per game:

Clark Hunt made a splash hiring the hottest name on the GM market.  In my mind he did pretty darn well finding a head coach as well.  He's on record as saying he loves the way the Steelers do things and wants to replicate their success.

With the Cardinals asking for permission to speak with Butler, will Hunt, Pioli and Haley do the same? Even though the Cardinals just went to the Super Bowl, the Chiefs are still an attractive job for a defensive coordinator.

UPDATE: Apparently we missed something. From the Arizona Republic:

One possible replacement for Pendergast is reportedly telling colleagues he's staying in his current job. Steelers linebackers coach Keith Butler is telling people in the Steelers organization that he's staying, according to the Pittsburgh Post-Gazette.

But where is the Pittsburgh Post-Gazette report? Per Rotoworld:

The Republic cites a Pittsburgh Post-Gazette report, but the story is nowhere to be found in the Post-Gazette. The Cardinals have since received permission to interview Butler for their defensive coordinator position, so it appears he will at least talk to Arizona.

One more update for good measure.  From the Pittsburgh reporter, Dale Lolley, that supposedly dropped the Butler interview bit:

After some checking over the weekend, I've determined that the Cardinals did not inquire about the services of Steelers linebackers coach Keith Butler. My source in Arizona was mistaken.