What Players Were the Best Value for the Chiefs in 2008?

Share All sharing options for: What Players Were the Best Value for the Chiefs in 2008? 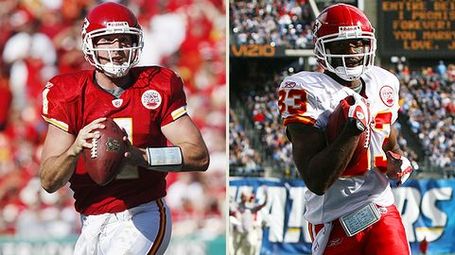 Okay everyone, here's the logic behind this. Inspired by Behind the Steel Curtain, we're ranking the top five "value" players. In other words, what players did we get the most production out of for the least amount of money?

If you click that BTSC link you'll see that Blitzburgh ranked ten Pittsburgh players. I'm only ranking five Kansas City Chiefs because most of these guys didn't do enough to separate themselves from each other.

And just for fun, here are the median salaries and total salary of the Chiefs over the last few years.

I list my top five best values after the jump. Let us know what your top five are in the comments.

For just over half a million dollars, the Chiefs got eight starts, 30 catches, 380 yards receiving and three touchdowns from the former Chicago wide out. Chargers WR Vincent Jackson only made $4,000 more than Bradley this year and about tripled his out output in every category showing there is still a lot of value to be had at this salary.

Even though Bradley was inconsistent and injured, he ended up being a pretty good value for his low salary. He was the third leading receiver behind Tony Gonzalez and Dwayne Bowe. For that and his potential next season if he can stay healthy, I like Bradley's value.

Soundbite: A half million dollars is worth a half of a season from a decent WR, especially with the Chiefs.

The Texas running back contributed 67 carries for over 350 yards rushing. He was essential during Larry Johnson's suspension when he started two games, making his low salary even more valuable.

Charles could probably be a spot or two back on this list but I'm going to keep him here because starting/#2 running backs are getting more and more expensive in the NFL and he appears to be a good #2.

Soundbite: As teams and schemes move to multiple RBs (and with LJ's future in doubt), Charles bang for his buck is much higher than other RB combo backs.

You could have put Jarrad Page on this list somewhere in each of his first three seasons. He's a 16 game starter who came into the NFL as a 7th round pick who is getting paid less than a half million dollars. Add Bernard Pollard in there and you've got your starting secondary paid out at almost $1.3 million last year.

The Raiders paid out over $12 million last year to safeties Michael Huff and Gibril Wilson.The Vikings paid out almost $13 million to their pair of safeties Darren Sharper and Madieu Williams.

Page is no Wilson or Williams but he's an improving starter getting paid at literally 1/20th of those stars salaries. That is a heck of a value.

Let's see. Brandon Carr will start for the Chiefs next season. He's making $440,000 a year. How much are other starting corners making?

Soundbite: 5th round starter at corner. Whew, glad we hit on this one.

Really? Did you think it was going to be anyone else?

I don't need to go over how much QBs get paid right now in the NFL. Especially top draft pick QBs. Let's not even throw in Thigpen's rushing yards, which rank him second on the team.