Get Your Recipes Ready for the Super Bowl

Share All sharing options for: Get Your Recipes Ready for the Super Bowl 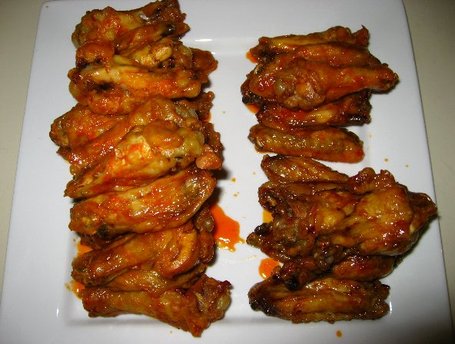 These chicken wings do not stand a chance against me today.  Not one bit.

Super Bowl Sunday.  It's bittersweet to say the least.  On the one hand, the season is nearly over.  This is the last real game we'll see for 8 months.  On the other hand, it's the culmination of what each team has been fighting for since preseason kicked off last August.

But to me there's one more positive to take away from this game.

For me, it's chicken wings all the way.  In fact, because wings have been synonymous with Sunday football around my house, a buddy of mine got the ultimate hot sauce shipped to me.  It's called Def Con Sauce.  Def Con 3, the wimpy, only-kinda-hot version, has this to say on the bottle:

Not since the beginning of recorded time has the human race had the chance of obtaining pure perfection encased within a small vessel.  Originally designed as a spicy wing sauce, many bipeds have used this liquid concoction on virtually everything edible.

Well said, Def Con 3, well said.  For all your hot sauce needs, The Hot Sauce Blog is a must-stop.

Click over to see what else is on the menu.

Bacon?  Why the heck not?

This mouth watering bacon weave has been making the rounds as of late.  Unhealthy? Check. Possibly offending people? Check. Edible without a fork and knife? Check.

Must be Super Bowl food then.

You could place a layer of cheese on the bacon weave first to prevent sauce leakage, then sauce, toppings, and more cheese.

Then place it on a perforated pizza pan with another pan underneath to allow the excess grease to drip off or pre-cook the bacon weave alone for crispy crust.

Though KansasCityShuffle calls the bacon weave an abomination, other folks like ArrowDread used it as the beginning of a mouth-watering brainstorming session:

I was thinking what else could be done with the weave…
-bacon weave as a pizza crust could be good
-bacon weave as a hamburger bun- no bread getting in the way of the meat
-replace tortilla with weave for a bacon burrito
-?
The possibilites are endless

The rest of my menu today looks like this:

Now that I've got my menu squared away, what's on yours?