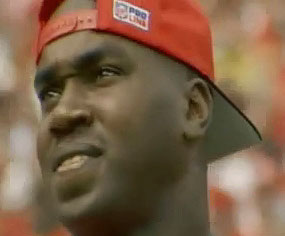 We'll be posting the Super Bowl open thread about an hour before kickoff.  -Primetime

"Thomas’ induction into the Hall of Fame is the most important, tangible accomplishment of the Carl Peterson era. The sellout crowds, the sparkling regular-season records in the 1990s, the additions of Joe Montana and Marcus Allen — none of those feats compares to the club’s homegrown franchise player having his career immortalized in Canton, Ohio."

Thomas' career highlights. How many firsts can one player have for a franchise?

I love this last line from Dan Saleaumua:

"He was so close the last two years that you knew it was just a matter of time. There are a lot of great players, so sometimes you have to wait your turn. He was such a great player that you knew he’d make it. He was so good at what he did. When the game was at Arrowhead and the crowd was in it and he’d beat the other team on the snap counts, they didn’t have a chance."

Thomas played the game with the same honor with which his father lived his life:

"I always think of my dad when I see the military planes," the 6-foot-3, 245-pounder once said. "It makes me feel sad that I had to grow up without him. But I guess it also gets my adrenaline going. I dedicate the game to him, and I want to do my best for him."

"Those three years defined Thomas, who went on to become one of the NFL’s premier pass rushers of all time. Now Cowher has the opportunity to shock the league by being the darkest of all dark horses - to come out of retirement and become KC’s next head coach despite the fact that few believe it will happen."

The most ridiculous stat of his college career?  27 sacks in a single season.

"It was in his senior season, though, that Thomas was as dominant as any Alabama player ever. He had 27 sacks, even though teams knew he was coming and often double-teamed him."

How cool is this for his mother?

Edith Morgan, anonymous in a large room packed with media here Saturday, gripped tightly the arm of the friend who had come with her as they waited hoping for the two words to be spoken. Four years in a row, those two words had not been said. This time she heard them, and tears spilled down her cheeks.

Arrowhead is the loudest stadium in the NFL, but it was at its loudest when Derrick was rocking the place. I’ve never seen a football player capable of hyping up the crowd the way he did. Sure, he had the uncanny ability to take over games late with his pass-rushing ability. It wasn’t just the way he took over games, though. D.T. communicated to the Arrowhead crowd with his body. He was in sync with us, and we were in sync with him. Derrick talked to us, and when he did it was sweeter than the sweetest lullaby our mothers ever sung to us.