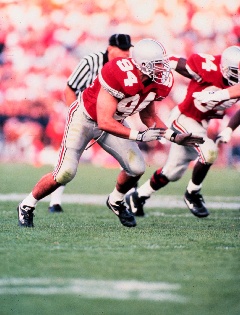 Earlier this week, I passed along an item from Cleveland Browns head coach Eric Mangini suggesting that Kansas City Chiefs LB Mike Vrabel had coaching in his future.

Vrabel, an Ohio State graduate and at least part-time Ohio resident, suggested that any future involving coaching, would likely begin with his alma mater.

''I would love to go back to Ohio State in any capacity,'' Vrabel said.

''I've got a lot of friends who coach there, gotten to know some of the players by working out there in the offseason. I would say that would be the only place I would probably coach. If I could get into coaching, I would probably look there first.''

Echoing Mangini's words, Chiefs coach Todd Haley said, "He's already coaching. Even when our offense is on the field, he's isn't afraid to point something out or make me aware of something.''

Like Haley, Chiefs LB Andy Studebaker has stated on several occasions his gratitude for the sideline coaching he's received from Vrabel.

This seems like the best future for Vrabel.  Many times, players have a hard time leaving the sport they've spent their entire child and adult lives playing.  Getting into coaching would keep him involved in football in a capacity that usually doesn't involve words like "ligament tear" or "cracked ribs".

Somebody needs to tell Jim Tressel his next assistant coach is playing for the Chiefs.