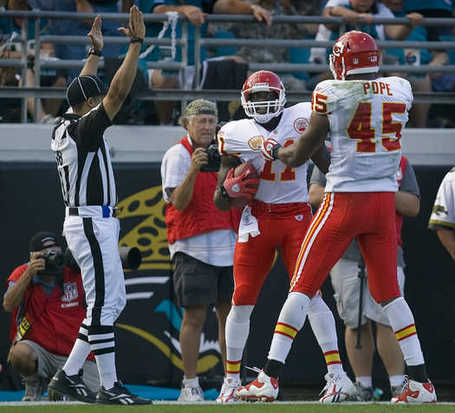 Neither player has been with the team for more than two games so the practice time with Matt Cassel hasn't been there.  That doesn't necessarily matter to head coach Todd Haley, who called receiver and quarterback practice time as "overrated."

Chambers, who was signed off waivers last week, noted his experience with "11 or 12 quarterbacks" in his career as a reason for his quick success.

"I have a lot of experience — and definitely a lot of experience with new quarterbacks. Matt has a ton of talent. You can see him maturing and growing. It will take awhile before he hits his peak. We didn’t get a lot of reps together but we were able to make plays when we did. We ran that play we scored (the first) touchdown on and it came open the exact same way."

He also remarked, "Everybody runs the same stuff," referring to the offense.

“Anytime a guy comes in, has to learn a new offense, you ask him to do a lot and he performs like that … you have to take your hat off to him,” said Cassel. “It goes to what kind of professional he is. We’re lucky to have him.”

Chambers' second touchdown reception in the corner of the end zone was almost a Montana-to-Davis-esque.

“That was just feel and experience,” Chambers said. “Matt was rolling out and all I had to do was catch the ball and make sure I stayed inbounds. I saw him run that play with [Moss] a couple of times. He put it right on the money.”

Long, who was promoted from the practice squad two weeks ago, said he began to feel more comfortable and "really started to relax" with his new quarterback.

As I've mentioned before, receivers in their first game with the Chiefs tend to do well.  In Bobby Wade's first game, he led the team with six receptions for 72 yards.  Long was targeted as often as Dwayne Bowe in his first game.  And now, Chambers, who caught two touchdown passes in his first game.

With that "L" on the board at the end of the game, Haley had plenty of problems to point to, including the play of the receivers.

Yeah, there were problems, but these two additions to the receiver corps are, overall, a positive.

I'm still in the "prove it" mode with Chambers since he's 31 years old and has to bring plenty of positivity to the offense to convince me he's more valuable than a younger player with more upside.  But Long is definitely in the Wes Welker mode and obviously has a nice rapport with Cassel.