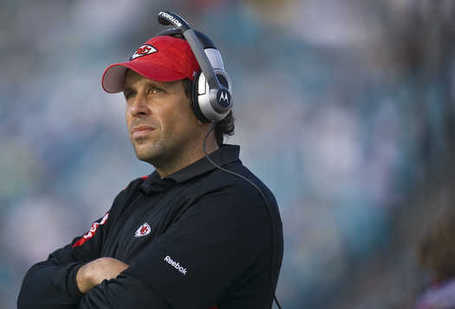 Without knowing the facts of the game, someone would look at the final score and figure the Chiefs must have been in quite a struggle. Save for the last three minutes of the game, they would be wrong. When Jacksonville RB Maurice Jones-Drew scored with four minutes, 26 seconds to play in the game, the Jaguars led 24-6 and obviously began celebrating.

That’s when the Chiefs scored a pair of touchdowns and recovered an onside kick in the span of 91 seconds. A second onside kick was not successful and the Jags stumbled off the field with a three-point victory.

The Chiefs spent two weeks working on tweaking the offense, working on fine-tuning, working on improvement. The play calls and approach looked different. The result did not.

Kansas City lost again Sunday, and it did it the same old way: poor pass protection, questionable play calls, and the appearance of a disorganized unit that couldn’t adjust quickly enough. Coach Todd Haley took a magnifying glass and scalpel to his offense for two weeks. Time was supposed to help the Chiefs swerve back onto the road toward progress. But this didn’t look much like progress: a 24-21 loss to Jacksonville, a team with problems and a fan base that seems leery that improvement is taking place.

"I expect him to make every one," said punter Dustin Colquitt, who is the holder on field goals. "But (56 yards), going into the wind? That’s a tall order."

The encouraging thing for the Chiefs is that such a task is reasonable enough for Succop to try it. In the past, when Kansas City cycled through a new kicker seemingly every few months, Colquitt said the decision would have been easy on what to do in a long-range situation.

"We would’ve had to have a short punt," Colquitt said. "You can depend on him (Succop) from just about anywhere."

That’s something the Chiefs just haven’t had. So, even in an impossible situation, Kansas City gave Succop a shot. Coach Todd Haley saw the snap and the kick. Haley thought it would be good, too.

"When it took off," Haley said, "it looked like it had a chance. But the wind caught it. That would’ve been a tremendous kick. It really got knocked down at the end. It looked like it was going to have a chance."

Mike Brown did not lose this game himself; he had a lot of help from a lot of his teammates and coaches. If Brown plays this game at an All-Pro level there’s a good chance the Chiefs would have still found other ways to lose.

It’s just that right now, the margin of error for the Chiefs is so thin they can’t overcome a bad day from one of their safeties, especially when his poor play leads to a pair of scores.

Offensively, the Chiefs continue to have their problems. The running game produced just 60 yards, they didn’t convert a third down until late in the fourth quarter and Cassel was sacked three times by what has been an anemic Jacksonville pass rush.

So anything Chambers can provide will be welcome, like what he did in the last minutes of the game.

First, was the 54-yard score, which is the longest pass play and scoring play of the season for the Chiefs. In fact, it’s the longest touchdown pass the Chiefs have thrown in five years, since RB Priest Holmes caught a 60-yard TD throw during the 2005 season from QB Trent Green.

OFFENSE: New Addition Clicks, But Too Late from Bob Gretz

It took eight games and countless wide-receiver combinations, but the Chiefs finally hit on one that worked in Sunday’s 24-21 loss to the Jaguars.

The most recent additions to the group, Chris Chambers and Lance Long, led the way. Chambers, who joined the Chiefs only last week, scored two touchdowns — both in the last 3 minutes of the game.

Chambers, Long catch on quickly for Chiefs from KC Star

That’s the story of the 2009 Kansas City defense: some good things, but too many bad.

For instance, they put at a lot of pressure on Jaguars QB David Garrard throughout the game. But they were able to sack him only once.

They had a large number of negative plays, as they spent a lot of time in the backfield and forced nine minus plays for the Jaguars, including a fumble that was recovered by the Chiefs.

Yet, they gave up another handful of big plays, as Jacksonville had 10 plays of 12 yards or more, including a 61-yard touchdown pass and a 28-yard TD run. There were also plays of 45 and 33 yards.

"It appeared we were out of position on a couple of those plays," said Todd Haley. "We’re not going to win games or have chances to win many games when we’re giving up big plays and that has been the big problem on defense."

The Chiefs were happy enough with their running game their first time without the suspended Larry Johnson.

His main replacements, Jamaal Charles and Kolby Smith, combined to average more than 5 yards a carry.

The problem is that the Chiefs gave them the ball a total of only 10 times in a 24-21 loss to the Jaguars on Sunday. The game quickly became unbalanced for the Chiefs. They handed the ball to their running backs — including Dantrell Savage — 12 times while Matt Cassel threw 39 passes.

The Jaguars, who had been playing a 3-4 defense, surprised the Chiefs by playing mostly a 4-3.

Succop’s kick actually looked pretty good as it left his foot and started to rise. But right around the five-yard line, the wind knocked it down and it was short. The kick fell into the hands of Jaguars CB Rashean Mathis and that’s when the fun started.

Mathis brought the ball out of the end zone and headed right; he broke past several Chiefs, and was then in open field, chugging down the sidelines towards a possible touchdown. Finally, at the Chiefs 15-yard line, punter and holder Dustin Colquitt knocked him out of bounds. The return was 91 yards total, but ended up being just forgotten yardage.

Way downfield, the Jaguars were hit with an illegal block in the back penalty, so even had Mathis scored the TD would have been wiped out by the flag.

Colquitt would have liked to have had that information before he threw himself at Mathis.

"You’ve got to do what you have to do at the time," said Colquitt, who banged up his shoulder a bit on the play but returned in the second half.

Jacksonville had four plays from scrimmage of more than 25 yards plus a 44-yard punt return.

"They did some things we really didn’t go over in practice," Brown said. "You prepare for things, but we hadn’t seen those things all week, so there was some miscommunication."

The plays ruined what otherwise could have been a big day for the Chiefs’ defense. Tamba Hali and Brandon Flowers were continually disruptive, and Wallace Gilberry had a third-down sack that pushed Jacksonville to the edge of field-goal position. Josh Scobee was then wide left on a 53-yard attempt.

Derrick Johnson also forced a fumble that put the Chiefs on the Jaguars’ 20, but the Chiefs settled for a field goal in that instance.

"It’s always the same thing," cornerback Brandon Carr said. "We play well and we play well but there’s always a few big plays and we let the game get away from us."

Chiefs’ defense gives up too many big plays from KC Star

Finally, some good economic news: The Kansas City Chiefs have lowered the price of their logo shot glasses to just $7.00 at the team store on their Web site. A gift that makes watching the Chiefs more tolerable - 2 ounces at a time. Chiefs garden gnomes are still $25, however.

Anyway, we think it was a sound business decision to lower the shot glass price as booze consumption is up 821% on Sundays in the greater Kansas City area this year. Or so we hear. Sunday, the Chiefs coughed up 426 yards of offense to Jacksonville, held the ball for just 23:00, didn't convert a third-down until the fourth quarter and, despite a frantic yet unfulfilled rally in the fourth, exited the game as the lone NFL team without a rushing touchdown this season. Just to update, that's 30 losses in their last 33 games and 14 of the last 16 on the road.

K.C. is at Oakland next week and with a loss to the Raiders, we just may get drunk enough with our new shot glasses to order the garden gnome. Maybe two.

Goin' Deep: Intrigue from around the National Football League from NY Daily News

Sunday’s it-wasn’t-as-close-as-the-final-score-would-indicate, 24-21 win over the Kansas City Chiefs saw the Jaguars return to their familiar 4-3 defense, and the results were stunning.

The Chiefs were held to 60 yards rushing, a week after the Jaguars allowed a franchise-record 305 yards rushing by the Titans.

Chiefs quarterback Matt Cassel was sacked three times, by a team that had just five sacks through seven games.

Jaguars return to 4-3 roots from Jaguars.com

almighty31 thanx to my supporters that came to duval. Valdosta state c u soon

MrKolbySmith @mrbigplay850 good luck tomorrow. Look forward to facing off with you on the 22nd. What up tho

kb_kcstar Of all the reasons for the Chiefs' offense to be good, it seems that only desperation can motivate this group.

dussery: @goatboytim the chiefs tried the last three minutes of the game

BrentMichael06: @Adam_Schefter funny play Chiefs Leonard Pope gave a first down sign when he was 10yds short on 3rd down

midacoll: the chiefs stink, but you already knew that...

justd913: bummed the Eagles lost, but did the announcer HAVE to call the Chiefs bottom feeders?! Give us a damn break, we are in "rebuilding phase"

jhailos: Awesome day for the Chiefs. We play like garbage and are now tied for the worst record in football. Can we earn the #1 pick??